This article could use an infobox! If there is already an infobox on this page, it may need more information. If you have any basic knowledge of the game, please add an infobox to this page by using {{Game}} template.

This article could use an infobox! If there is already an infobox on this page, it may need more information. If you have any basic knowledge of the game, please add an infobox to this page by using {{Game}} template. 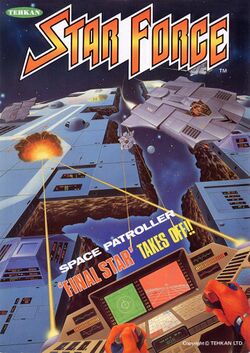 This guide is for the 1984 Arcade game. For the Atari 2600 game of the same name as Star Force's alternative name, see Mega Force.

Star Force is a vertical shooter developed by Tecmo (known at the time as Tehkan). It was released in some arcades outside of Japan as Mega Force. The game consists of a single fighter ship flying through space, and over floating terrain while being attacked by enemy ships, and destroying land based targets. The only weapon is the ship's guns, but they can be enhanced with a power-up that attaches to the ship and grants the player rapid fire capability.

Received better in Japan than it was in North America, Star Force was considered repetitive by many American players, while others applauded the game for its degree of challenge. It was ported to several popular Japanese consoles such as the Famicom, MSX, Sega SG-1000, and the Sharp X68000 home computer, as well as a Mobile phone app. The only console to see an American release was the NES, where the game was improved over the original Japanese release. Star Force was remade in 1995, along with two other NES shooters, with barely upgraded graphics and sounds for the SNES in the Japanese only release of the Caravan Shooting Collection. It was also included in Hudson's compilation of Famicom shooters in 2006 in Hudson Best Collection Vol. 5.

In the year 2010 of Dimension Almanac, there was a mysterious planet named GORDESS which was moving in the darkness of the cosmos for the purpose of mass murder and plunder. Everyone gave up fighting against GORDESS because of its awesome power. One day a brave soldier riding a space patroller challenged GORDESS to fight. People called this space patroller "FINAL STAR", wishing to be saved. You must bring an end to the murders which have been committed for the past 2,000 years.

The player must pilot a spaceship over series series of islands - drifting in outer-space - shooting enemy spacecraft and ground-based targets. Special symbols appear at regular intervals and can be shot or collected for bonuses. The levels are designated by letters of the Greek alphabet.

A single power-up, known as a purser, must first be shot before it can be collected. It first appears as a brown circle. Contact with this circle will destroy your ship. Once it is shot, the purser appears in the form of a smaller ship, which can be collected in order to grant your ship rapid fire power. Most of the time, this power-up shows up right after mid-boss.

There are 25 levels and each is marked with a letter. The first 24 letters pertain the to greek alphabet (Alpha, Beta, Gamma, Delta, etc.) The final level is marked with letter "I" for "Infinity". After beating the 25th level, it will just repeat itself.

Enemies in the game have predetermined patterns of appearance, as well as stage backgrounds. That means after some time they just repeat themselves (except bosses which are unique to a stage, although very similar).

Each level has an end-of-level boss that must be defeated before the player can progress to the next level. The boss itself has no offensive abilities other than collision, however the platform that it launches from contains two cannons that fire a few shots at your ship before scrolling off the screen.

When you see these enemies, don't kill them. Avoid them so that they chase you while you shoot as many objects as you can until you reach boss. You must shoot objects in order to trigger the appearance of the boss. It will only show up after enough enemies or objects are destroyed.
When dealing with enemy type #2, try to line them up by going into any corner and wait for them to follow you. That way they occupy the same location and take less space on screen so you can move more freely.
In USA and EU version of the game, enemy type #1 will not chase you, he just disappears off screen. Enemy type #2 will chase you at which point you can avoid it for a while until it eventually speeds up and catches you, at which point you can kill it by shooting when it's next to you on your right or left side. Enemy #3 also speeds up and catches up with you eventually, so kill it before it gets too fast.

The NES conversion of Star Force contained a few graphical and gameplay improvements over the Famicom version that improved the accuracy of the port. The enemies are harder. Enemies and objects are colored differently. Sounds were changed slightly, although the songs remained the same. The Game Over theme is a new addition to NES version. The title screen was altered. The question mark tiles have different icon after being shot which are on the right side instead of the left.

Star Force was also converted for play on mobile phones.