Note that only normal enemies are listed in this section, to see a list with information about the game's special enemies and bosses, go to their respective section.

Whenever you are on the Map Screen, you can view the contents of an enemy group by leaving the cursor on top of it. You will then see the total number of enemies in that group next to it's map icon, and the specific types inside it on the bottom of the screen. These are the enemy names alongside their corresponding icons: 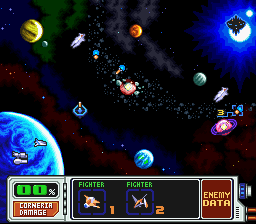 Viewing the ships in a fighter group.

These are launched directly from the Astropolis and make a B-line for your Satellite Defense System (SDS). If they reach your SDS they will turn it against you, charging its laser to fire on Corneria. They are the fasted moving thing in the game, both on the overworld and in a space battle. Only encountered on Hard and Expert difficulty.


If not destroyed before reaching your SDS, they will latch on requiring you to engage in an event similar to a battle on a planetary surface but with more vertical space. The Brain Spoilers will be static and are easily shot down. However, your SDS will be rotating making them somewhat difficult to track.

When engaged in space, you only have a few seconds to destroy them before they escape. An efficient strategy with Miyu or Fay is to immediately boost and shoot charged shots, as one hit will destroy them. As long as you can auto-target them you still have a chance to shoot them down, even if the model is not on screen.

Easily destroyed by a charged shot or a few laser blasts. It's health increases slightly based on difficulty and how far into a game you are. Can be accompanied by other Planet Missiles and Spread Missiles.

A single charged shot can take out the cluster. Beware not to let a stray laser connect before the charged shot as it will separate the group (hence the name "spread"), leaving you with four independent missiles. Can be accompanied by other Spread Missiles and Planet Missiles.

All appendages must be destroyed before the core. It is in a perpetual spin and likes to move vertically. It is never accompanied by other missiles or enemies.

The two knobs at the top and bottom must be destroyed before the shaft. It is in a perpetual spin. It is never accompanied by other missiles or enemies.