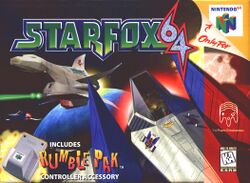 Lylat Wiki has articles about:

The planned second game in the series for the SNES, Star Fox 2, was scrapped due to the upcoming release of the Nintendo 64, but some of its features were used in Star Fox 64, such as all range mode and encounters with Star Wolf. It was the first game to introduce support for the Rumble Pak and was in fact advertised heavily alongside the new device. The game received positive ratings from reviewers who praised its smooth animation, detailed visuals, and use of multiple gameplay paths.

Star Fox 64 3D was a remake for the Nintendo 3DS released in 2011. The gameplay is very similar to that of the original N64 version. The player can enable "Gyro Controls", using the 3DS' internal gyroscope sensor to control the Arwing. Character dialogue, messages and control information are displayed on the touch screen.

The single-player campaign features two modes: "64 Mode", which replicates the original game's objectives and difficulty, and "3DS Mode", in which difficulty and objectives have been tuned and balanced to account for the 3D perspective and gyro controls. A third "Expert" mode can be unlocked during gameplay, adding the difficulty of the original game's expert setting. Each mode separately tracks the player's scores and medals.

Star Fox 64 3D also features a new multiplayer "Battle Mode", which allows players to play up to 4-player LAN multiplayer (via Download Play), or to battle against CPU opponents. During battles, each player's face appears on opponents' screens in a live reaction feed from the console's internal camera.

This multiplayer mode is completely separate from the single-player game and does not offer any bonus content, unlike the Nintendo 64 version which allowed players to unlock the "Landmaster" tank and "on-foot" modes.

"Corneria, fourth planet of the Lylat system. The evil Andross turned this once-thriving system into a wasteland of near extinction.

General Pepper of the Cornerian army was successful in exiling this maniacal scientist to the barren, deserted planet Venom.

Five years later, General Pepper noticed strange activity coming from Venom. James McCloud, Pigma Dengar, and Peppy Hare of the Star Fox team were sent to investigate. Upon their arrival, Pigma betrayed the team, and James and Peppy were captured by Andross.

A few years have passed. Andross has again invaded the Lylat system. General Pepper has turned to a new Star Fox team headed by Fox McCloud to save Corneria and free the Lylat system once again." -Star Fox 64 3D website