In 1979, Doug Neubauer programmed Star Raiders for the Atari 800 home computer. A revolution in 3D home gaming, it inspired programmers all over the world and led to the creation of more modern series such as Wing Commander and Star Wars: X-Wing. Programmers in Japan were no exception, and in 1985, programmers at Namco developed Star Luster, complete with its own Japanese flair. Like Star Raiders, Star Luster has you piloting a fighter craft from a first person view, and warping around sectors in space through a stellar grid to destroy enemies before they move in and destroy your bases. All the while, your ship can be crippled through destructive enemy shots, and must be repaired by docking at the base for supplies. Star Luster broke the Star Raiders mold by incorporating an adventure mode that provided the player with a greater goal than the complete extermination of every enemy in space.

Star Luster was only released in Japan, but it is easily accessible by English speakers since none of the game's messages are written in Japanese, only English. But like many other Japanese games developed around this time, it can be mercilessly difficult. It incorporates a few enemy designs that originated from Bosconian. Star Luster saw some life after the Famicom. Nintendo adapted the title for play in the arcade as part of their Vs. Arcade system, calling it Vs. Star Luster. A graphically enhanced version was developed for the Sharp X68000 that allowed rapid fire, and featured a new hidden enemy, along with a direct conversion of the Famicom game. In 1998, Namco included the original, along with an improved version on Namco Anthology 1 for the PlayStation that featured full 3D graphics and included a Conquest mode, but was more faithful to the Famicom gameplay than the X68000 version. Shortly after that, Namco developed a sequel to the original, for the PlayStation, known as Star Ixiom. In the Japanese version of the Nintendo GameCube title Star Fox: Assault as a hidden bonus game, along with other classic Namco titles Xevious and Battle City. 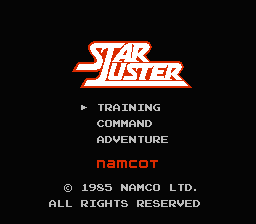 Just after the wounds of the Bosconian War were healing and life was returning to normal in galaxies far beyond the Milky Way, a dark and sinister force was beginning to grow. In a far off course of galactic space, 730 light years away, emerged a being of a different dimension. This dark and sinister monster was beyond the experience, beyond even the imagination, of all men. This being was called BATTURA.

BATTURA began to infest all corners of the Universe. Those seeking to survive, sought refuge in a mass exodus to the Milky Way. But BATTURA had begun his final attack on this last refuge of civilization. An Intergalactic Investigation Team was established to combat the force of BATTURA. The team became involved in a great battle with BATTURA. All perished, except for one lone survivor named Dan Heinick. Dan, who barely escaped death himself, realized that his mission was to return to report on the vile spread of BATTURA to the Federal Council, and to combat this evil force.

Taken from Dan's report to the Federal Council: "There is no physical weapon that can destroy the power of BATTURA. BATTURA is now targeting the Milky Way to attack and control. His goal is to extract the last bit of energy found at the very core of our Milky Way. Once extracting that energy, he will have the power to control the entire Universe..."

Dan realized that the only way to combat BATTURA was to utilize the energy of the Milky Way in his Quasar Plasmatron. Dan then made preparations to attack the Dark Planet hideaway of BATTURA. This evil hideaway was located in the Green Star Constellation, and was where BATTURA extracted the IGUDRAZIL.

In his beloved StarFighter jet known as "GAIA", Dan has launched what could be his last mission. As the brilliant flame emerges from his engines, his jet fades away like a distant star on an unknown mission into the Universe...