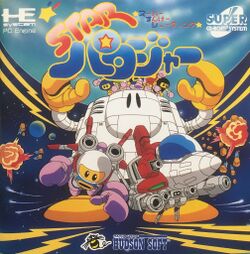 Star Parodier is a shoot 'em up developed by Hudson Soft for the PC Engine CD-ROM. It is a parody of the Star Soldier series, similar to Konami's Parodius, and was originally only released in Japan, though it was also intended to be released in North America under the name Fantasy Star Soldier.

The game was later released outside Japan through the Wii Virtual Console in Europe on May 16, 2008 after it was released in Japan on May 7, 2008, after a re-release in its home country. It was finally released in North America on August 11, 2008, however this port would be delisted in March 2014. The game was also included in the list of games available for the PC Engine CoreGrafx Mini in March 19, 2020, available in all regions.

Star Parodier is a vertical scrolling shooter, much like the Star Soldier games, and features many of the same conventions, such as collecting power-ups to upgrade the player's weapons, and facing several bosses and minibosses as they progress through the game. The game also features the 2 and 5 minute high score time attack modes seen in previous games.

However, in parodying the hard sci-fi atmosphere of the Star Soldier games, Star Parodier takes a light hearted approach by featuring cute, cartoonish graphics and toning down the violence (for example, defeated enemies wave white flags in surrender). 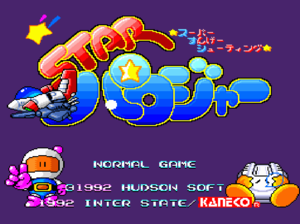