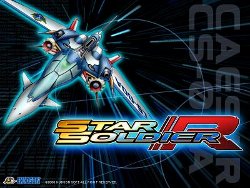 Star Soldier R is one of several video games released exclusively as WiiWare through the Wii Shop Channel. It was released with the Japanese launch of WiiWare on March 25, 2008, in North America on May 19, 2008, and in Europe on May 20, 2008 with the European launch of WiiWare.

Star Soldier R retains classic gameplay features from the Star Soldier series, such as the vertical-scrolling shooter style, three adjustable speeds for the player's ship, and score bonuses once the player has achieved a score of 50,000 and 80,000 points.

Instead of a traditional progressive level structure, the game revolves around time attack-style gameplay, called Caravan mode, with players aiming to score as many points as possible in either two or five minute game modes in one of the game's levels. Unlike previous installments in the series, however, there are only two playable levels. Aside from regular scrolling-shooter gameplay, the game also has a Fast Shot mode which measures how quickly the player can press the fire button.

The game has two types of primary power-ups, in the form of red and blue capsules. Red power-up capsules enhance the offensive ability of the player's ship, eventually resulting in a five-way shot. Blue power-ups enhance the ship's "Force," a shield that protects the ship from enemy attacks and can be separated from the ship to attack enemies.

If the player presses the A button during the Credits, then they can take control of the craft from the first Star Soldier game.