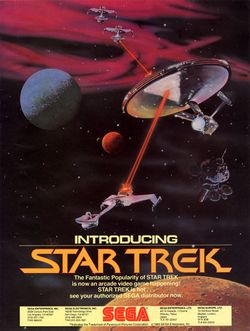 Star Trek (the full title: Star Trek: Strategic Operations Simulator) is a first-person shooter arcade game, released by Sega, in 1982; it runs on their G80 Vector hardware, and is based on the original series of that science-fiction show. The player (assuming the role of Captain of the USS Enterprise), must use a rotary controller to rotate the Enterprise left and right and four different buttons to make it move forward at slow speeds ("IMPULSE"), fire an unlimited amount of phasers ("PHASERS"), fire a limited amount of photon torpedoes ("PHOTON TORPEDOES"), and move forward at a super speed ("WARP") - and the screen is divided into three different sections. The top-left one, called "STATUS", displays your score, shield levels, amount of photon torpedoes, and warp energy, while that top-right one (called "SCANNER") displays an overhead view of local space (much like the radars in Namco's Rally-X, New Rally-X, and Bosconian); finally, the bottom one (known as "VIEWER"), displays a first-person view of space, as if you were looking out of the ship's front window (like in Atari's Battlezone).

At the start of the game, you will hear the late James Doohan (1920-2005, as "Scotty") speak the phrase "You are the Captain of the Starship Enterprise" followed by the first few bars of the show's opening theme and Leonard Nimoy (1931-2015, as Mr. Spock) saying "Welcome aboard, Captain"; the Enterprise, which will start out with 1-4 shields and photon torpedoes (depending on how the arcade owner has set the cabinet), will then be thrust into space to defend against the Klingons.

The main enemy ships are the Klingon Battle Cruisers, which come in three colours; the red ones will not take any notice of the Enterprise, and try to destroy a Starbase (after which they will turn purple), but the purple ones will not take any notice of a Starbase and try to destroy the Enterprise by firing shots at it (and after a certain period of time, they will turn white), and the white ones will try to fly into the Enterprise. Anti-Matter Saucers can also appear and fly around the screen randomly (and they can only be killed with a Phaser) - but if one should attach itself to the Enterprise, it will drain its warp energy and fly away. After a number of rounds you will proceed to the Nomad Round; in it, Nomad, which can again only be killed with a Phaser, will fly around the screen dropping mines, which will explode and generate chain reactions that must be avoided. Once Nomad has dropped its thirtieth and final mine it will wait for it to explode and fly away, thus ending the round - and after every 10000 to 40000 points (again, this depends on how that arcade operator has set the cabinet) you will receive an extra shield, Photon Torpedo and warp energy unit for extended playtime.

When the Enterprise is protected by a shield, it will be protected against enemy fire and contact; it is represented in the status area by a green bar, and once it has disappeared, the Enterprise will take damage when hit. For the first three hits, it will lose: its depleted shields, Photon Torpedoes (which are represented by red rectangles) and Warp Drive (which is represented by a blue bar) in that order - and the fourth hit will destroy the Enterprise and end the game. In order to repair the damage, you will have to fly into a Starbase; once you have done so the text "DOCKED" will appear on the screen and you will receive an extra shield, Photon Torpedo and warp energy unit. Although only four of each unit type are displayed in the status area at any time, the maximum amount you can have is 255 - and there are a total of 40 different rounds, for which you must kill all the enemies to protect the Starbases.