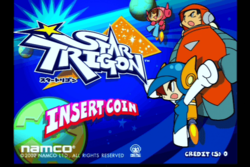 Star Trigon (スタートリゴン, lit. Sutā Torigon) is a puzzle arcade game that was released by Namco in 2002 only in Japan; it runs upon that company's System 10 hardware, and has no connections with Konami's 1990 vertical scrolling shooter Trigon (pronounced "Try-gon"), as it is a spin-off from the Mr. Driller series. The player must use a single button to aid one of three selectable characters, Susumu Hori ("Mr. Driller" himself), Chuta Bigbang and Wataru Hoshi, in rescuing stranded aliens known as Uchujin, by jumping from one planet to the next and creating a line behind them in the process - and whenever they create a Trigon around three planets with their lines, any Uchujin surrounded within it will be saved. There are also "wide" stages in which the characters cannot see where they are going, and in 2008, the game was converted for play on the iOS and Microsoft Windows operating systems.