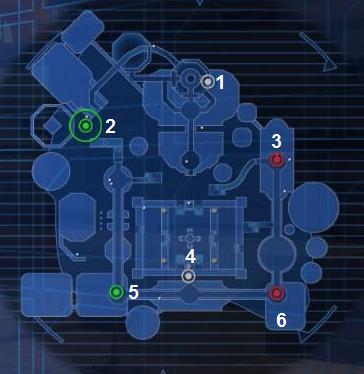 As you can see from the map legend, this level is intense. There are more fast-paced firefights in this level than in possibly all the levels before it. Unless, of course, you decide to play as a sniper, in which case here are your instructions: spawn at CP 5 and walk north far enough to see a good part of the courtyard. Shoot any enemy units you see.

[1]
Battle in the Clouds

If you elected to battle this one out in the trenches, start out as a grunt soldier on the top level (5) and run east. Look out: the enemy AI seems to know how to use grenades to their advantage in these narrow hallways. If you still haven't mastered that art, try to imitate what the Imperial soldiers are doing. Fight your way along slowly, and be sure not to expose yourself to fire from more than one direction. Make sure to have backup in these halls; attacking alone is suicide. Snipers shine in this particular hallway, as enemies cannot strafe enough to effectively dodge and are thus easy headshots. Another thing: make sure you have an escape route in case you don't see a grenade until it's halfway to you. Wait for the opportune time to rush in and capture CP 6; sometimes it will take 3 or 4 minutes to clear out all the opposing units. Once that one is taken, move north, still on the upper level, towards CP 3. Use the same tactics to take this one that you used for the last CP. From here, try to make your way down the ramp and to the Carbon Freezing Chamber (1). If you get killed (and you probably will), you can either keep trying to get to CP 1 or you can spawn as a sniper and shoot people in the courtyard from the stair landing. The choice is yours, but keep in mind that by this time, there won't be much more than 15 enemy units remaining. Note: if that last enemy unit is hiding from you, look in the corner underneath CP 5.

Begin at CP 5, going east to 6. If you aim slightly higher and to the right of the actual CP, that's where the first enemy will spawn. If you elect to open up fire right away, you'll draw their attention, so be ready for a battle. By this point you should have reached the last 'room' in the corridor, so use that as cover and toss grenades as needed. Otherwise, the troops tend to file out the side and take position around the tower, sniping your comrades as they come into range. Once the coast is relatively clear (and it doesn't tend to be completely free from obstacles), make a mad dash towards the CP. You're likely to be shot from the side, so hopefully you can take a bit of damage. Your comrades are total idiots here, so don't expect much, if any, help – you're on your own in this board more so than most others! (If you jump a few times along your way while exposed, the enemy often misses.)

Once the CP begins to drain, there will be enemy spawning. Count on three, hope for two, feel thrilled if there's just one. And if there are none, don't count on that happening again for a long while. Right as you enter the CP 6 room, you'll have just enough time to pitch a grenade towards the cluster of troopers shooting at your comrades from behind the circular wall. This CP is tricky: it takes practice, sharp wits and sharper reaction.

After securing CP 6, go around the circular tower. Pay attention to your map to know when the enemy is rounding the turn at the same time. Head shots work best here. The bridge to CP 3 usually is moderately guarded and there's always at least one sniper in the far window. This area isn't too difficult to clear even as soldiers from the CP are coming towards you.

Here's the trick to capturing CP 3: After you cross the bridge, hang out in the 'room' where the sniper(s) were. On the right hand side of the room there's a hidden ammo droid in the wall. Stand here and replenish your ammo. While the enemy is spawning at the CP at the end of the hall, continue to throw grenades down there. You'll blow up the medical droid eventually, so hopefully you have a little extra life juice when you finally make a play for the CP. Throw grenades until reinforcements arrive. The best scenario is entering the CP area with two comrades to draw enemy fire (they naturally run towards the CP, but it's always a good idea to give them the 'follow me' command to be on the safe side), as the enemy will spawn at least once, usually three at a time. Once in the area, having your back against the ammo droid gives you a good vantage on spawning troopers to shoot in the back. In this area you're also apt to learn the art of using an enemy as cover.

The carbon freezing chamber is usually taken way before this point. Only very rarely will the Empire take control of it, and when they do it's usually taken right back. There's always the possibility of there being one of those odd games when nothing happens that's supposed to happen, but aside from those don't even worry about the carbon freeze chamber.

One that note, however, you can help your situation out a little bit by taking a perch on the middle of the landing (where the ramp doubles back) after taking the previous CP. Troopers are storming the entrance to the carbon freeze chamber, so pick them off from above. Careful, the turret will be firing at you, so take that out with some head shots. Once the area is thinned out and your comrades take a good hold of it (if your teammates are descending into the fountain area you know you're in good shape), go down the ramp and head towards CP 4.

There can be a fun little skirmish or two along the way, but if you're adept at taking cover and know when to be aggressive you should be okay. By now, you're probably getting low on ammo, so be mindful of that and pick up as much as you can.

The goal isn't to take CP 4 right away, though it's possible. If you're too hasty you're likely to be killed, probably from a turret on one of the sides. As you're approaching the CP, you'll see a sniper almost standing on the CP behind the turret. Enemies can be anywhere at this point, so keep one eye on the field and another on your map. Clear a path to the CP and run past it, taking shelter around the first corner on your left. Stay back far enough not to get shot but yet still drain the CP. This won't capture it, but it stops them from spawning, and halting that wins games more than bloodletting. While hidden, a few troops will attempt to come up the ramp. Head shot them. You can peek around the corner when you feel it's safe. Just use your own best judgement as to when to take the CP: the safest time is when the enemy stops getting into the turrets. From there it's a mop up of errant stormtroopers. As mentioned, sometimes one is standing alone under CP 5.

If you're experienced and with a little luck, this isn't a terribly difficult board.

On the other hand, it's a cinch to get killed on your way to CP 6. If you die relatively early, meaning the Empire hasn't taken control of CP 4 yet, spawn at CP 5 and jump down to the floor. You'll lose about half or more of your strength, but that's more than adequate to take CP 5 and defend it. From there just do as much damage as you can until you get killed, then spawn at CP 5 as the enemy will be filling the hallway and tearing your idiots to shreds. By the time you reach CP 6, CP 1 will almost invariably be lost. CP 1 shouldn't change hands more than this unless you have direct input on the situation. (Let the game play itself. You'll notice CP 4 is almost always the last command post the rebels have to deal with. Watch any board play itself – the CP that's always the last to be taken is the one you want to take as soon as you can. Here you can take it right away, but you'll lose it just as fast without being there to guard it. CPs that drain the slowest are most important to the enemy.) You want this to be their last CP as there is little good cover after spawning and the closest CP is a mile away for them. They'll have the advantage of having the two, maybe three turrets, but they can't hit the broad side of a star destroyer (unless they're shooting at you).

It's a trick-filled board, but also one of the more rewarding to master. Using this method usually garners 70–80 kills and a melted gun barrel.

Close to the Carbon Freezing Chamber are a lot of buildings, but if you go there a message "Return to Battlefield" will appear. Somewhere here you can see a building that looks like the bottom-right command post building, but there is no bridge. You will need a Jet Trooper, because a Dark Trooper flies upwards while Jet Trooper is controllable, to get in this building. Note that it is much less detailed than the Command Post version, and there is no life or ammo droid. The benefit here is that you will have a good view to shoot some EMP's at the enemies, however it's quite hard to find because it's the only one in the entire map.