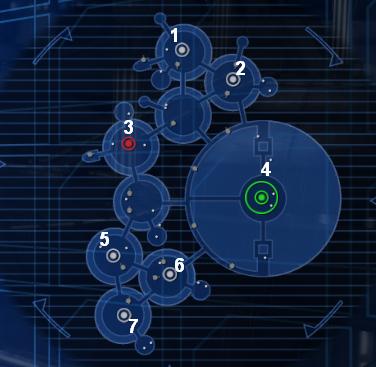 Start as a jet trooper and leave the command post (4) through the north hallway. Use your jetpack as much as possible to get to the closest CP (2). Don't try to take CP 1 yet, you need backup. Just defend CP 2 until you get 5-10 allies with you. (If you die, feel free to switch to a normal soldier.) From here, it's pretty straightforward: take CP 1, then CP 3. Just remember not to run too far ahead of your troops and get surrounded by enemies. Alternatively, you can spawn as a sniper at CP 1, and later at CP 3. There are prime sniping positions on the "cul-de-sacs" leading off the main platforms. Just get to the highest spot you can find. Whichever method you choose, work with your units to finish off the rest of their troops.

With as much speed as you can muster (seriously), start at CP4 as a Jet Trooper and fly out the side passage on the left and over, past CP6, to CP5. As you are capturing it, peg grenades down the ramp that leads up to it from the CIS base. This will stop any droids coming up to kill you. This grenade thing is vital because if a droid comes up the ramp to CP5 and fires you, the Republic is in a sticky situation. Capturing this stops the CIS from getting CP6 and CP7. If you are unable to get this first bit down properly, just restart the battle. From there just push ahead towards CP3 and watch out for turrets, your EMP launcher is really good against the turrets if you know how to use it. Instead of turning to aim, aim by strafing left or right. Make sure you stay as the Jet Trooper because your EMP launcher is really really effective against droidikas. From there, just battle as you want.