Fleet Battles are the game's only ranked mode when played against other players. It is a strategic tug-of-war mode with various objectives to complete. The ultimate goal is to destroy the enemy's capital ship - either the MC75 or the Imperial Star Destroyer.

Morale is the gauge at which indicates which side is defending and which side is attacking. The team which controls the morale gauge will control the fight. A team that is stuck on defence will eventually be whittled down and destroyed.

When attacking, prevent the enemy from gaining morale by covering AI fighters, not dying, and driving off the enemy fighter squadron. Avoid pursuing retreating enemy players into their squadron - it is a quick way of being ganged up on and dying.

Points are awarded to players as follows:

Corvettes are powerful and heavily armoured ships that attack each other in the first minute of the game. When one side gains enough morale points to go on the offensive, both corvettes self-destruct and the attacking team gets a new corvette that attacks the enemy frigates.

Corvettes should only be attacked when enemy players are not present to support it.

Frigates are similar to corvettes, but usually don't move from their spawn locations. These two ships provide fire support to the team and have special attacks when your team is on offence, effectively making them invincible until the enemy team gains enough morale.

Most importantly to the attacking team, however, are how frigates repair and resupply the attacking team. If your team is defending, this functionality is unavailable. Frigates are fairly heavily armed with gun turrets and long range missile launchers - all of which can be destroyed to make subsequent attacks easier.

If both enemy frigates are destroyed, friendly frigates will move to the middle of the map. They will not advance on the enemy capital ship.

Usually referred to as either the capital ship or the flagship, the Flagship is the target of the Fleet Battles game mode, and destroying the flagship is how you win.

Flagship armament includes a number of laser turrets, ion cannons for disabling attackers and targeting shield systems, and a number of warhead launchers. The ventral side of flagships also feature tractor beam emitters that can immobilize players flying under them - tractor beams can be broken out of by boosting free, or destroying the emitter. Destroying the emitter can be difficult as tractor beams can hit you through the capital ship's shields. The guns on capital ships do not respawn, so destroying its turrets is one way of chipping it down.

Flagships have three subsystems that are targets. 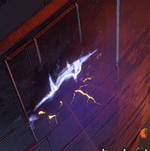 The MC75 is the New Republic flagship. Like the Star Destroyer, it features a number of defenses, including a few ion weapons, tractor beams protecting its belly, and most guns facing the sides or above.

The biggest weakness to the MC75 is the centralized location of most of its subsystems. The power system (bottom), targeting (top), and both shield generators are all located amidships, not too far from each other. This allows a single bomber to potentially hit multiple subsystems in one or two passes. Combined with their extreme durability and speed, TIE bombers should not have too much difficulty attacking the MC75. 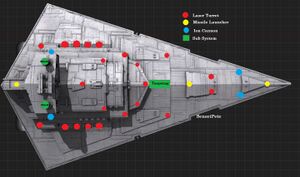 The Imperial Star Destroyer is very difficult to attack, as its subsystems are located far apart from each other. Additionally, as the Star Destroyer is mostly flat, it is very easy for as many as nine to eleven guns to fire at you if you approach it from the front - and you haven't even gotten into torpedo range against a subsystem, nevermind bombing range. 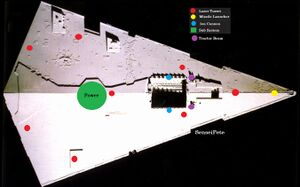 When playing as the New Republic, you must therefore attack the Star Destroyer either from long range with ion or proton torpedoes, or from odd angles - like directly above or from below. Getting at its shield generators at the back end of the ship is extremely difficult. If you can lower the Star Destroyer's shields, a few gun runs on the ISD's turrets can make subsequent attacks easier. The turrets are rather predictably placed, but nonetheless difficult to attack, especially head on. 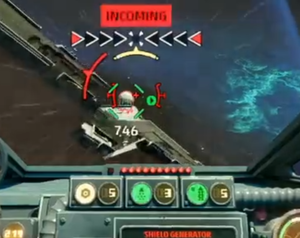 Fire proton torpedoes through this notch from below.

Traditional fleet battle gameplay will feature two interceptors for blocking the enemy team's movements, a fighter for its flexibility (sometimes replaced with a third interceptor), a bomber for flipping and maintaining the morale gauge, and a support for shields, repair, and coordination.

All maps can be broken down into five distinct zones:

Controlling these zones, and the morale meter, is key to winning in Fleet Battles. When on offence, work on pushing the enemy team out from their frigate zone and into the enemy capital ship zone so that you can go to work on their frigates. Avoid pursuing enemies which have been driven off - a retreating enemy is just about as good as a dead one, and overextending will grant the enemy team the morale bonus they need to go on the offensive.

When on offence, deny the enemy team's bomber from attacking the AI - a few multi-missiles or Goliath missiles from a bomber can gain the enemy team enough morale to go on the offensive, not only removing your corvette as a threat but also opening up your frigates to attack.

It is very important to not die when on offence, as this sets your team back considerably. When you die, you not only give the enemy team morale they need to attack, but your own team will also be playing one player down until you get back into the fray - making it harder for your teammates to stay alive. This can result in a runaway advantage that can wipe out your entire squadron.

If you are instead defending, your goal will be to flip the morale meter as quickly as possible and shut down the enemy's attacking phase. Bombers with multi-missiles and goliath missiles will serve you well here. You can ignore the enemy corvette for the most part, as once you flip the morale meter, it will self-destruct. Once the enemy players have been forced out of their attacking zone, you can attack the enemy corvette directly.

At the end of the match, five players from either team are recognized for certain milestones.