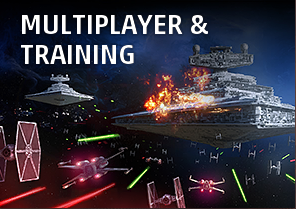 There are two multiplayer modes available for Star Wars: Squadrons.

Dogfights is simply a 5v5 deathmatch mode. There are no objectives other than the other five enemy fighters. All ships are available to fly, including bombers and support ships - though bringing bombs is ill advised. 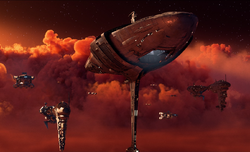 Fleet Battles is the only ranked game mode, and can also be fought co-op against AI enemies. Fleet Battles is unlocked when you reach level 5. Fleet Battles is an objective-based gamemode where the goal is to destroy the other team's capital ship - either an Imperial Star Destroyer or an MC75 cruiser.

Each is protected by a pair of frigates - either the Imperial Arquitens class command cruiser, or the Republican Nebulon-B Frigate. Both frigates must be destroyed in order to proceed onto the battleship.

Morale is the gauge used to determine who is defending and who is attacking. Morale is gained by shooting down either the AI fighters in the middle of the map, enemy players (worth more morale than the AI), or by destroying the enemy corvette. When defending, the enemy capital ships gain an icon indicating they should not be engaged. Approaching the enemy frigates (or capital ship) when this icon is present will quickly get you shot down. When attacking, friendly frigates also become resupply points that you can park under for repairs and supplies.

The presence of the corvette is a quick and easy way to determine who is attacking and who is defending. Whoever is attacking gains the support of a corvette - either the Correlian CR90, or the Imperial Raider. The corvette will attack both enemy fighters and the enemy frigates. Once the frigates are destroyed, the enemy capital ship becomes vulnerable and the corvette attacks that.

Once the frigates have been destroyed, the enemy battleship can be attacked. It is equipped with four subsystems as well as hull sections that must be destroyed in order to win the match.

There is also a practice mode, which allows you to fly as either side freely. All ship options are unlocked, allowing you to experiment. Opening the pause menu also allows you to spawn in various enemies. Enemies available to face in the training grounds include:

There is also a timed obstacle course you can use to test your controls and flying skill.

Added in the 4.0 release, custom and private matches allow players to host their own games, and allowing limited modifications to the standard game types. For additional information, see the Custom Matches page.