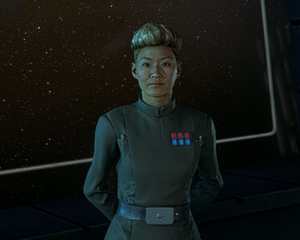 Terisa eager to exact her full vengeance on Lindon.

The penultimate Imperial mission of the campaign.

The two girls of Titan Squadron are discussing the outcome of the previous mission, with Vonreg being frustrated at being forced to let the Starhawk go at the last minute, and Sol defending Kerrill's decision to withdraw. Sol asks what they should have done without missile guidance. Vonreg claims that Vanguard Squadron and Lindon are laughing at them, but Sol mentions the damage done to the Starhawk. Neither is willing to come to a consensus, so they head to the briefing room.

There, Terisa will claim vengeance is sweet - but that now is not the time to get complacent. They will lure the Starhawk and Vanguard Squadron into the Ringali nebula, and crush both underfoot.

Our enemy is on the run. You have done well, Titan Squadron. But, in order to stop them, I need you to break off from the Overseer and fly ahead of the enemy fleet to set a trap. LT-514's calculations indicate that the remains of the Nadiri fleet is attempting to reach the New Republic capital of Chandrila. To do so, they must navigate the junkyard of scrapped Imperial ships they've been using to build that monstrous Starhawk. Poetic, isn't it? We've detected several reactor cores in the junkyard. Titan, fly ahead of their fleet and use the cores to create a minefield on their path. Active cores will detonate when shot, and devastate any ships nearby. That includes you. Wield this advantage cautiously. Destroy any Republic starfighters attempting to scout the dangers of the debris field. Your TIEs alone may struggle against the fleet's larger ships. Detonate the cores to take them out. If all goes according to plan, the Starhawk will either be destroyed in your minefield, or be forced to divert into the deadly Ringali Nebula. Either way, we win.

After the briefing, speak to Shen and LT-514. LT-514 is explaining the plan to Shen, who is looking forward to an engagement with Vanguard Squadron. In the hangar, Grey is attempting to temper Vonreg's fire, which is barely enough for him to handle.

Launch the mission when ready. You'll have a choice of either a TIE Bomber or a TIE Reaper. 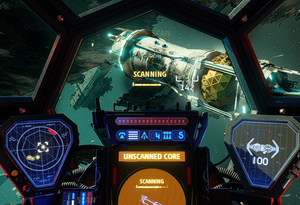 For this mission, the rebels will be advancing down one of three lanes. Each is lined with unscanned cores - scanning them when prompted will let you identify which cores are active and which are inactive. Inactive cores are useless duds and can be destroyed at leisure; active cores, when shot, will cause a huge explosion that will devastate the republic corvettes and frigates that will pass by them. 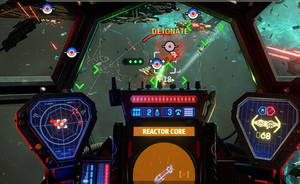 Detonate the core and catch all four corvettes in the blast.

The first lane has ten cores total - three inactive, seven active. After you've identified all the cores, you'll be bounced by a group of X-wings. Silence them and prepare for a quartet of corvettes, which will be your first victims. Your wingmates will exclaim that an enemy ship is in range of a core - a single detonation will critically wound all four corvettes. They may split up and head along different routes, but with at least five active cores between the corvettes and a mission failure, you have a lot of tries to get it right.

After sinking these corvettes, you'll need to move one lane over and prepare for another corvette group. This time you'll need to scan the cores while taking fire from a group of X-wings. You'll once again encounter a majority of active cores. Scan all the cores and wrap up the X-wing assault before the next enemy group advances. Use the debris on either side to shield yourself from the corvettes, revealing yourself only when your squadmates shout to detonate a core. Pop out, destroy the core, and head back into the debris field to do it again. This quartet of corvettes moves faster, and the timing on the cores is slightly different. Two core hits, however, will be enough to fry a corvette. 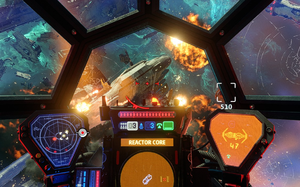 The frigate is sunk by a chain reaction.

After sinking this corvette group, a Republic frigate will make a run for it. This frigate is escorted heavily, and there aren't enough cores in your lane to disable it. There might be one core at the beginning, but that's it. Instead, the frigate will run towards a giant cluster of cores at the end of its lane. Scanning one of these cores scans the whole cluster, and it's revealed they're all active.

As soon as the signal is given, detonate one of these cores to trigger a chain reaction that annihilates the frigate.

At the frigate's destruction, its X-wing escorts will bug out, and you can return to the Overseer with a mission success.