Picking up where the previous mission left off, you now play as the Rebellion, as a member of Echo Squadron. Follow Echo 1 through the rebel fleet, familiarizing yourself with the controls of the X-wing as you go. The X-wing's controls are identical to that of the TIE Fighter you flew in the previous mission, with one difference: the X-wing features shields.

Echo 1 will fly you through the fleet, telling you to balance power settings as you go. Switch to Engines with 1,

when prompted. This will be followed by engines (2,

). The game will also point out the shield indicator on the right side of your instruments - shield regenerates, but your ship's HP does not (unless you use the repair kit power). You will then re-balance your systems with 4, 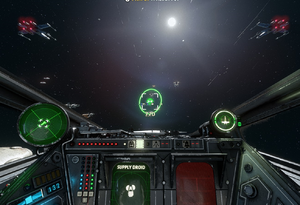 Resupply from the U-Wing.

Your X-wing will also be equipped with missiles you can use against enemy TIEs. A U-wing will launch a supply droid with a large green aura around it - collect this to stock up on missiles. You will then be cleared for a hyperspace jump - simply align yourself in the circle with the arrows facing forward, just like the Gozanti in the previous mission.

You'll come out of hyperspace on the wrong side of the convoy. In order to penetrate enemy lines and head for the convoy, Echo Leader will suggest using your boost to blow through and under the Star Destroyer pinning the transport convoy down. Switch all power to the engines to prepare the boost. When Echo Leader tells you to boost, press Space, 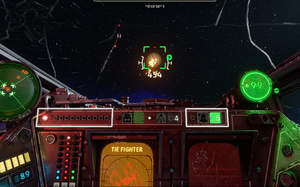 The first TIEs you'll engage will be launched from the Quasar class carrier. Shoot these down and Lindon will direct you to cover the convoy proper, which is being attacked by about a dozen TIEs and two Gozanti carriers, which hyperdrive out as soon as they drop off the TIEs. Lindon and the remainder of Echo Squadron will engage the TIEs with you. Use your repair ability and power to shields to stay alive throughout the fight.

After splashing all the TIEs, continue to follow Echo 1 as you shepherd the convoy. The Quasar will launch eight additional TIEs for you to take down. After taking this third wave down, the Quasar will become available as a target. It will be on low health after getting hammered by the corvette that appeared to assist you, so finish it off with your lasers. 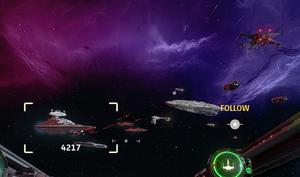 Follow Echo Leader again as he turns the freighters towards the Star Destroyer again. Fortunately, the rest of the rebel fleet arrives on the star destroyer's flank. An enemy corvette moves towards the convoy - sink it quickly with concentrated gunfire from the rest of your squadron. You can also use concussion missiles, but the Raider being a large target, don't bother waiting for a lock - simply get in close and dumb-fire the missile when you can. Destroy the Raider and follow Javes again. 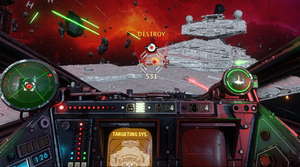 Destroy the targeting system and then follow the squadron to hyperspace.