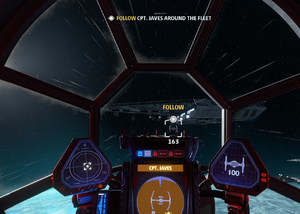 Alderaan chose destruction. They incited rebellion and anarchy...and paid the price. The survivors continue to spread dissent. Find them. Do not rest until the destruction of Alderaan is complete.

After choosing both of your characters' customizations, Lord Vader will discuss the destruction of Alderaan, and you will be put into the perspective of your Imperial pilot.

After looking around the hangar and then boarding your TIE, you will be tasked with a power-up sequence. Follow the on-screen prompts as instructed. The boot-up sequence is unique to this section of the game and does not happen in future missions. Target Lindon Javes' fighter using F,

to proceed. The mission objective marker will stay on him so you can keep track of him, even if you don't have him targeted. Throttle up with

, or W and exit the hangar. 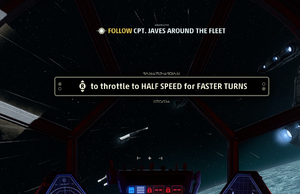 Follow Javes throughout the fleet - consisting of an Imperial Star Destroyer, Lambda class shuttles, Arquitens cruisers, Gozanti TIE carriers, and Quasar class carriers. The on-screen prompts will help you get used to the controls of the basic flight controls, such as lowering your speed to half for faster turns.

If you crash into a capital ship, the game will pause and prompt you to repair your fighter on the fly using the left auxiliary control. You'll also fly through the shields of the Star Destroyer, which you can pass through without problems. You can die while at this section of the game, but you can't anger Javes or anyone else if you dawdle, observe the fleet, and get used to your controls. Capital ship engines also cause huge amounts of damage to your fighter, so don't stray too close to them.

After about a minute or so of talk between Terisa and Lindon, you will be cleared to dock to your Gozanti for a hyperspace jump. Head to the white circular waypoint on your HUD, and ensure you face the direction of the arrows in order to jump. 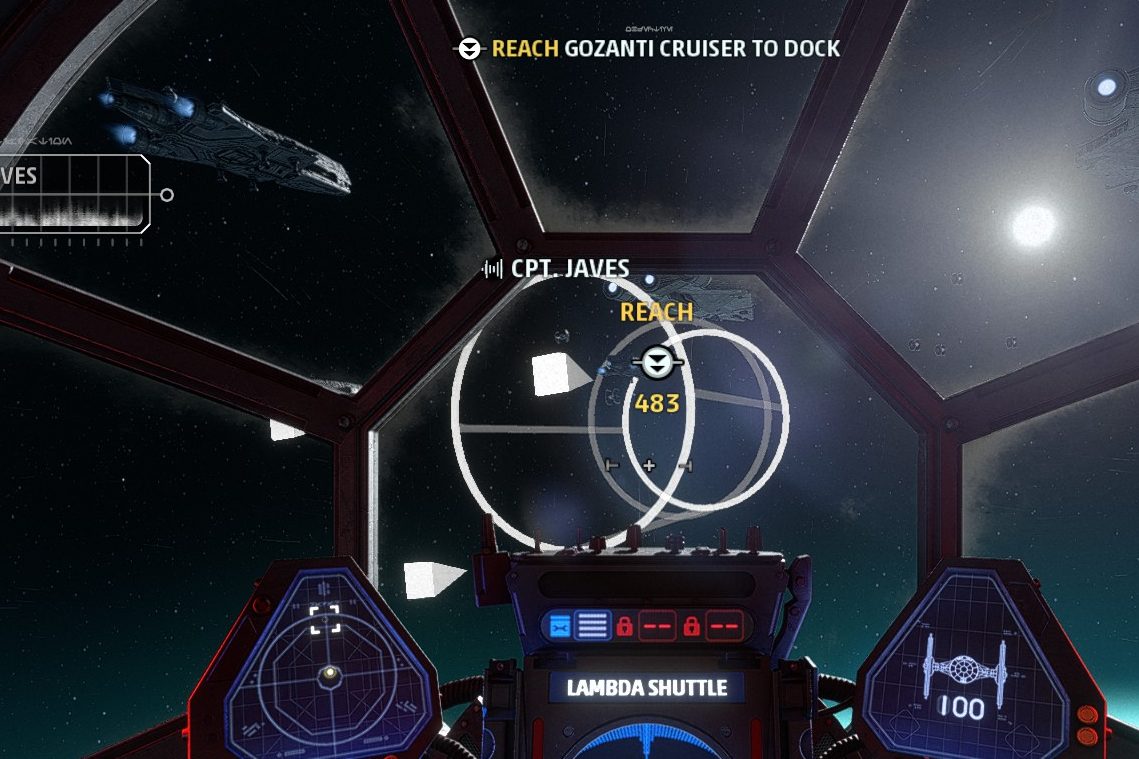 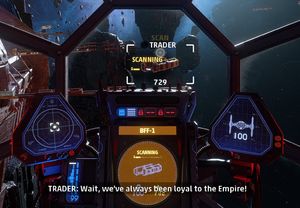 Arrive at Forstar Haven, a pirate outpost, and continue to follow Lindon as he talks to the stationmaster.

Your first task will be to scan two of the large BFF-1 bulk freighters in the area - simply target them (as you did with Lindon at the beginning of the tutorial) and remain close to them to scan them. As with all other capital ships, stay away from the freighter's engines. The freighters also have no weapons, so feel free to simply park your fighter next to them with the freighter targeted to complete the scan. 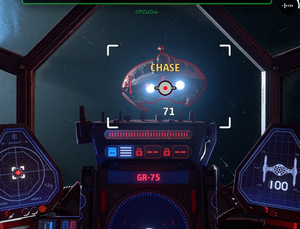 The third freighter, a GR75, will attempt to flee the area from your cargo inspection. Javes will instruct you to open fire on the freighter.

You will now have access to your guns. Target the GR75 and open fire with

, taking care not to get too close to its engines. Shave off about 20% of its health to get it to surrender. Lindon will tell you to leave it to the fleet. You can also destroy the GR75, to Lindon's warning and the Stationmaster's ire.

You will then be contacted by an enraged stationmaster, who activates the laser batteries on the station itself. With your newfound familiarity with the ship's guns, it's time to attack something that attacks back.

Use the target cycle option to target each of the turbolasers in turn and destroy them. They are relatively slow firing and generally inaccurate, though they can hit you on occasion as you make your run. When you take damage, press Q,

to repair your ship and continue fighting.

Your allies will attack and destroy some of these thin skinned defences, but with about 20 turrets to destroy, you will be able to get a few yourself as well. 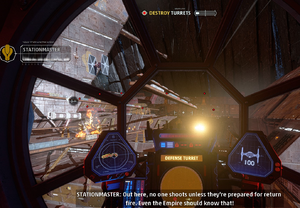 With this many targets visible, you can also eventually run out of laser weapon charge. Pressing 2,

lets you redirect power from your engines to your weapons for faster laser charging, and can be overcharged for additional damage.

Avoid attacking enemies further than 1000 metres away from you to conserve laser charge. To reach turrets quickly, press 1,

to divert power to engines for faster movement and a boost. Get used to switching power between systems - it is highly important going forward.

When you get disoriented, use

, or T to acquire a new target. Destroy all of the stationmaster's turrets and listen him bemoan his tattered reputation. Kerrill will get an idea as to where the target convoy is hiding - follow her close to the cave at the back of the station. 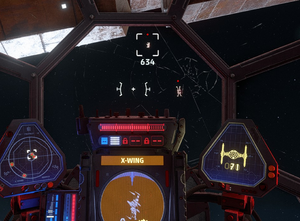 Shoot down all X-wings.

Twelve rebel X-wings appear from the cave - you will now have to learn how to fight and fly at the same time. Take down each of the X-wings in turn, using the same techniques against the turrets against these fighters. Don't forget to reduce your speed to half for the tightest turns.

Take more care around the station's geometry - you can take considerable damage if you crash. The X-wings, however, will have more problems than you with the level geometry, oftentimes getting stuck against walls and the station itself and making themselves easy targets. Don't forget to slow down when engaging stuck targets, or else you'll crash yourself.

After splashing all the X-wings, Kerrill will note the cave the X-wings came out of again - follow her into the tunnel. 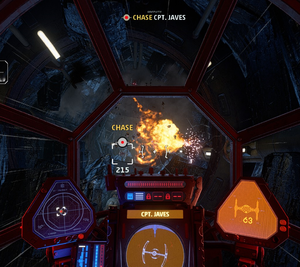 Chasing Lindon.
After flying into the tunnel, you and Terisa will be disabled by ion missiles fired by Captain Javes, who announces his decision to defect to the rebellion in the wake of Alderaan's destruction.

With all systems down, repeatedly press any button to reboot your TIE.

Pursue the traitor through the tunnel, dodging the plumes of fire created by Javes' missiles. Don't worry about attacking Javes - he can't be shot down. Redirect all power to engines and just chase him until he reaches the end of the tunnel and collapses the exit behind him.

Pursue the target until it flies all the way to the end and collapses the tunnel behind it - and heads straight into the ISD Vigilance.