Your MMR Ranking is used for matchmaking purposes and cannot be viewed normally. This helps ensure you are not paired with players too far beyond your skill level. If you form a squadron with another player, they are counted as the player with the higher MMR.

The Operations Rank is tied to the 8 week Operations cycle. Obtain your first rank by completing ten placement matches. This can only be done in Fleet Battles against other players. The operations rank levels are:

It is possible to be demoted from one subdivision to another, but you cannot drop from one division to the lower one.

Following the conclusion of every Operation, your competitive Rank tied to Fleet Battles will reset. You will receive an amount of Glory - a currency used for cosmetics - depending on the highest rank achieved, not the rank you are at when the operation ends.

Upon reaching Valiant, Legend, and Galactic Ace levels for the first time, you will be awarded with a special helmet. 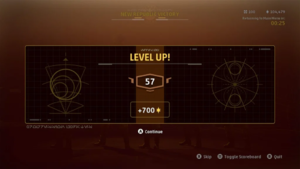 Levels are the most publicly visible method of progression, and is the number next to the player's name. Levels are gained simply by playing the game, and thus are not necessarily an indicator of skill. When you are below level 40, you will gain two requisition points - used for unlocking ship components. You will also gain Glory at any level, for unlocking cosmetics. At level 41 and above, you will gain only Glory - having gained enough requisition to unlock all fighter components for both sides.

At level 5, you gain an additional loadout slot, giving you additional flexibility in multiplayer. You will gain a third at level 15.

At level 25 you gain a fourth loadout slot and be awarded 500 Glory and 4 Requisition.

At level 35 you will gain a fifth loadout slot and be awarded 700 Glory and 4 Requisition.

Unlocking all items available will leave 1 Requisition left over.