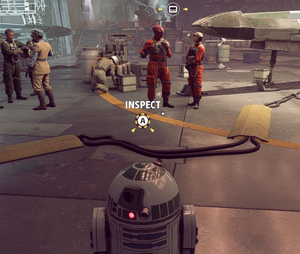 Following the previous mission, you'll need to speak with Gunny and Keo. Optionally, speak to the astromech droid in front of you. It will alternate between two animations: rocking left and right on its legs, or beeping and spinning in a circle. Gunny and Keo will be thankful for the aid you lent, emphasize the team effort, and then talk about a swoop race. Following this discussion, head into the briefing room.

A cutscene will play with you meeting Wedge Antilles, and how Lindon needs an intact Imperial Star Destroyer for Project Starhawk.

As you may have overheard, Talus Group has cornered the Imperial Star Destroyer "Victorum" above the planet Yavin. They're in tough, but it's presented a great opportunity for us to jump in and not only disable that Star Destroyer but to seize control. So. First, we need to give ourselves some cover by knocking out the turrets. Naturally, if we can also take out the targeting system, that'll buy us even more time. Next, we need to prepare the Star Destroyer for boarding. You'll need to find a potential breach point in the Victorum's hull, preferably near the bridge. Once you find a good spot, bombard it until the hull is breached. However, we can expect that the Victorum still has plenty of TIE fighters. They WILL try to stop us. Once the skies are clear, we can bring in the boarding team. While our troops capture the bridge, Vanguard will defend the exterior from reinforcements. Once the boarding team has seized the bridge and is control of the Star Destroyer, we'll rendezvous with the Temperance. Okay. I think I accidentally made stealing a Star Destroyer sound simple. Let's hope it is.

Ardo and Lindon will warn the player about the power of a wounded Star Destroyer. Wedge will speak about how normally Rogue Squadron will handle missions like this, and how he, like Javes, flew with the Empire for a time. Grace in the hangar will speak of her father's patriotism to the Empire, and the power they commanded. Following these three optional discussions, launch the mission.

Wedge and Gunny will take the lead. Head for Talus Group, which consists of a wounded CR90 and a mix of A-wings and X-wings. Switch power to shields and begin the overcharge process while you head towards the battle. Wedge will give permission to engage switch to either weapons or engine power and dogfight the dozen or so mix of TIE Fighters and Interceptors. They should fall easily to your guns. Although you no longer have concussion missiles, ion missiles will still immobilize the target and make them a sitting duck for your guns.

The Victorum will launch yet another wave of TIEs that must be destroyed. Stay close to the Talus Group's CR90 and have it lend its aid. Don't forget to make use of the repair kit when necessary. 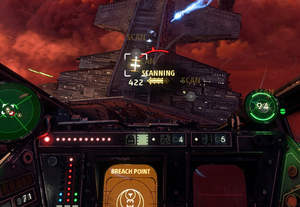 Your next objective will be to head for the ISD Victorum and disable its targeting system. Go for both its cannons and the targeting system located amidships. The Victorum's shield generators have already been destroyed, so use your guns from a safe distance.

Next, you'll be tasked with identifying the breach point on the ISD. Several will appear, but only one will be legitimate: the one located on the back of the Star Destroyer's neck, which your squadronmates will comment is the trash chute - a reference to The Empire Strikes Back. Scan this weak point without scanning any of the others to earn the Intelligence Operative medal. Around this time, the Star Destroyer will launch yet another wave of TIEs - work quickly with the Star Destroyer's weak point. 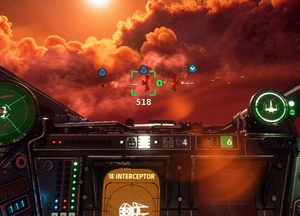 Eventually, Frisk will get in trouble - two TIE Interceptors will be marked with blue targeting icons. Destroy these to complete a bonus objective, save Frisk, and get the Trusty Wingmate medal. After saving Frisk, freely target both enemy fighters and the Victorum's gun turrets to make it safer to fly around the star destroyer.

With all fighters destroyed follow Wedge for a bit to the next objective. Three U-wings will appear and head for the breach point. To stop them will be a Quasar class carrier and its TIE complement. Ignore the fighters and go for the carrier, using ion missiles to weaken the target's shields. Try to stay above the Quasar as much as possible - it has very few guns on its dorsal surface.