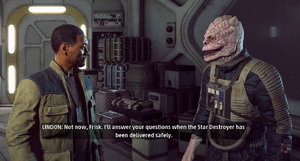 Upon entering the hangar, you will have the option of speaking to Gunny, Keo, and the Gonk droid next to the hangar doors. The Gonk droid will perform its signature "Gonk" when inspected.

Gunny will speak of fighting the Empire on Mimban, making a joke at the expense of Alphabet Squadron. Keo will talk about sensing an energy around Yavin.

You can also skip talking to Gunny and Keo and simply head into the briefing room to trigger a short cutscene. Frisk will express his displeasure of being kept in the dark regarding Project Starhawk to Lindon. They will then be interrupted by a distress call from the Star Destroyer Victorum.

We have an emergency. The Star Destroyer you captured has unexpectedly fallen out of hyperspace behind enemy lines. Out troops are repairing the hyperdrive as quickly as possible, but you need to buy them some time. There's an Imperial fleet advancing toward the Star Destroyer Victorum. I want A-wings intercepting enemy fighters. The rest of Vanguard will provide defense and support. I know Imperial protocol better than most. I have no doubt the Empire will disable the Victorum with ion weapons before sending shuttles to recapture it. Stop them at all costs. The Empire must not reclaim the Victorum. Once the Star Destroyer's hyperdrive is operational, cover its escape to safety. I'll send you rendezvous coordinates when the time is right.

Following the briefing, you can speak to Lindon and Ardo, or Gunny. Talking to Gunny will reveal how she lost her arm: caught in wreckage after being shot down by the Separatists during the Clone Wars. Meanwhile, Ardo will blame himself for failing to send more engineers to the project, to be reassured by Lindon.

You can also speak to Keo and Frisk in the hangar. Keo will talk about having hunches that are usually right, and how people on Miral are taught to respect the Force, even though Keo can't directly tap into it like others. Frisk will ask Keo to use the Force to predict lottery numbers, to be rebuffed by Keo.

This will be your first mission in the A-wing, and your first chance to customize your weapon loadout. Choose what best fits your playing style, though you can't go wrong with default weaponry. As the AI is not particularly manoeuvrable, barrage rockets can be a powerful upgrade to the quick-lock missile, as you will also be taking on shuttles that fly mostly in a straight line.

Upon arriving into the giant debris field with the Victorum straight ahead, you will be tasked with intercepting six TIE Bombers and their fighter escort. The Victorum will lend minimal assistance, but with you in an interceptor, eliminating these shouldn't take long. Switch full power to weapons and shoot down each bomber in turn. The TIE Fighters here are equipped with ion weapons, so watch your shield power. Shoot down all six bombers and their fighter escort will bug out.

The Empire will send three pairs of shuttles to try to recapture the Star Destroyer. If even one makes it to the Victorum, the mission will end in failure. You will also learn about the wingman command system. Target an enemy and press

, or H to instruct your wingmen to attack that target. Select the other and chase it down. The shuttles are fast, but as an A-wing, you're faster. Be familiar with switching power to engines and weapons to catch each shuttle in turn. 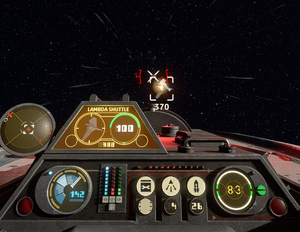 The shuttles follow preset paths through the debris field, usually flying inside wreckage to try to cover themselves. Reduce power to prevent overshooting. Rockets and standard laser cannons help when intercepting the shuttles - the short-range lasers, while powerful, require additional speed and thus piloting skill to get into range.

After shooting down all the shuttles, follow Gunny in her U-wing. Gunny will call in Y-wings to attack the carriers - your task will be to cover them. The carriers will launch a continuous stream of TIEs, so splash as many TIEs as possible around the carrier to cover the Y-wings, which will do the heavy lifting for you. After the Y-wings destroy both carriers, follow Keo.

Keo will then show you how to properly drift the fighter. Divert all power to engines and follow the markers. When Keo says to drift, press and hold

, or Shift while turning to drift the fighter. There will be no further enemies to deal with, so take your time and as many tries as you need to get it right. If you're having trouble, try modifying the Drift Input Mode in the Controls menu from Hold to Double-Tap.

Once you've successfully buzzed the bridge of the Victorum will try to hyperdrive away, but its hyperdrive will cut out. 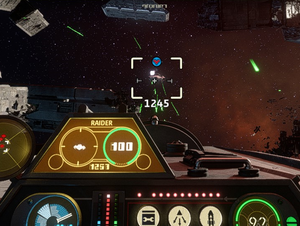 Asset Secured
Acquired the Not Even Close medal (Victorum escaped with at least 30% hull).

Additional enemy reinforcements appear, including several carriers which launch another wave of bombers. Go for these to protect the Victorum. After destroying these, an Imperial Raider will show up and start an attack run on the Victorum. Destroy the bombers first, and then target this Raider. Barrage rockets work extremely well, as does the wingman attack command. The Victorum's turbolasers should turn back online around this time.

Ideally, you'll have destroyed the raider just in time for the carriers to launch a second wave of bombers. The shields of the Victorum will come back online just in time to catch the proton bombs deployed by the bombers. Intercept all the bombers. This will be followed by two raiders closing in on the Victorum at the same time. They can't penetrate the shields, but pick one and have your wingmates attack it. Follow up with rocket strikes (or the anti-starfighter missile if you've picked that) against its hull. Save your rockets and missiles until its shields are down, then unload into it to destroy each raider in turn.

As soon as you can, head for the nav beacon and jump away with the Victorum to complete the mission.