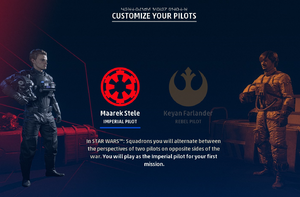 After Alderaan is destroyed, pilots of the REBEL ALLIANCE fight for galactic freedom.
Meanwhile, fearless TIE pilots enforce the will of the GALACTIC EMPIRE.

The single player campaign features 14 missions that alternate between the Galactic Empire and New Republic viewpoints. As such, you will have to make two characters: one aligned with the Empire, and the other with the Republic.

There are four categories of character customization in the single player campaign, with additional elements available in multiplayer.

There are twenty pre-set head designs available in the campaign - ten per side. See the bottom of the page.

The body structure can either be male or female.

There are ten voices available for the New Republic and the Empire.

Each pilot's name can be customized however you want.

Non-Human Head Options
You cannot select the Abednedo, Sullustan, Duros, or Twi'lek heads for the single player campaign, even if you unlocked them from the main menu. It won't matter anyway - there are no cases where you will see your character's face in the campaign.

Character customization options for single player cannot be reset unless you reset your story progression, so ensure you have everything set up properly.

After choosing your character customization options, you can choose either standard or instruments only mode. With instruments only, things like targeting brackets and health bars for objectives will not appear on the main screen - you must fly using your instruments only, and see only what a normal human being in the same cockpit would see. Standard is the recommended option, especially for new players.

Once all your settings have been configured, you can launch the game and proceed to the game's prologue.