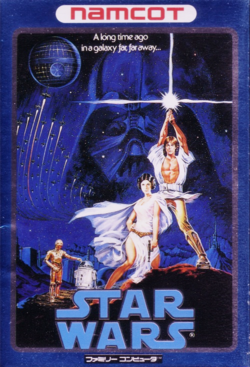 This guide is for the Japan-only Famicom game. For the original arcade game by Atari, see Star Wars.

Star Wars is a Famicom game released in 1987 by Namco. Despite being based on Star Wars Episode IV: A New Hope, some levels are based on the later two Star Wars films. It is the only game in the Star Wars franchise that was released exclusively in Japan. The game is a common side-scrolling platformer where the player controls a black-haired Luke Skywalker, as he travels to join the Rebellion against the Empire.

While based on the original Star Wars movie, the game takes many liberties with the story line. It features a variety of Star Wars characters and cameos of some movie locations. Unlike the film, however, Luke starts the game with his lightsaber, many characters already know him, and he seemingly pilots the Millennium Falcon without the aid of either Han Solo or Chewbacca.

For the most part, the game is a typical side-scrolling platformer with two difficulty settings-the Novice Mission and the Pro Mission. Luke uses the lightsaber as his primary attack and can also use the Force to execute special maneuvers like floating, speeding and stopping time, among others. Energy to activate Force powers can be obtained through diamonds collected after killing an enemy, called "Force Points". When the characters are rescued, they will help Luke by providing hints and other actions that are important to progress through the game.

Between planets, the Millennium Falcon is forced to fight a wave of TIE Fighters that prevent its entrance to the next planet. The game switches to a first-person shooter perspective.

The final level involves using the X-Wing against the Death Star. While the film's climactic sequence occurred inside a long trench, the game's version can be roughly described as a vertically-scrolling overhead maze-like stage, complete with dead ends and intersections. At the end, there is the reactor's duct where the proton torpedoes will be shot automatically to destroy the station. If the player fails to get to the end within a limited amount of time, the Death Star will destroy Yavin IV and the game will be over.

The game is particularly difficult, as the player only has three lives and two continues (activated with enough Force Points), and Luke dies upon touching an enemy. The Millennium Falcon can sustain only one hit before being destroyed, which could be prevented using one of three deflector shield bursts.