The final stage is an entirely new style of game play. You will pilot the X-Wing from a top-down view as it scrolls vertically along the trench on the Death Star where Luke must drop a bomb. You start with 60 seconds on the clock. The clock counts down as you fly along, and if you fail to make it to the next checkpoint before time runs out, the Death Star will fire upon Yavin and the empire will win. If you reach the checkpoint in time, your current remaining time will be extended. Pushing up increases the speed at which you fly through the trench, but it also decreases your reaction time to anything flying towards you. As you pass through each checkpoint, the slowest speed that you are allowed to fly at decreases, forcing you to go faster and faster until you reach the end. 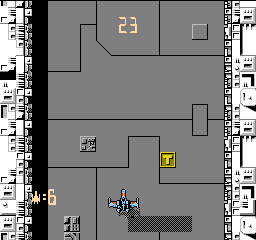 Collect the T tiles to freeze the timer 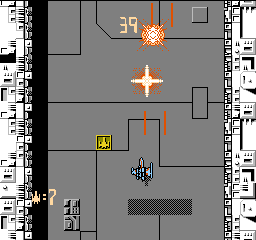 Collect the ship tiles for an extra life

As you fly through the trench, you will come across two different yellow colored tiles. One is a T, and it will freeze the timer briefly. The other looks like the silhouette of a ship, and it will give you an extra life. You will also notice green lasers that fire back down the trench at you. They won't do you any harm (in the Novice mission, although they may be more dangerous in the Pro mission). You will also encounter Tie Fighters that fly towards you as you head towards your destination. Remove them from your flight path by shooting at them. If they collide with you, you will lose one life.

The most dangerous element of this stage, by far, is the construction of the trench. At various points, it shrinks or expands, or even divides. When it divides, you must choose to go down the left or right path. In a few cases, one of these paths will dead-end, and there's no way to know which path is safe unless you have played through the stage quite a number of times. In general, you should place yourself as close to the center of the screen as you can, and be prepared to fly to the left or right whenever necessary. What follows is a breakdown of the seven sections that you must fly through in order to reach the hole which you must bomb to destroy the Death Star.

Section 7
The level starts off fairly easy, with the trench wide open for the majority. There are a couple of T tiles early on, and one extra life tile. It closes off the left or right sides at various moments, but there are no surprises. You can fly at full speed through here until you reach section 6.
Section 6
The trench will divide in this level, not once, but twice. Either pathway is safe to travel through. After the section division, barriers will appear very abruptly on the left and right sides of the trench in an alternating fashion. 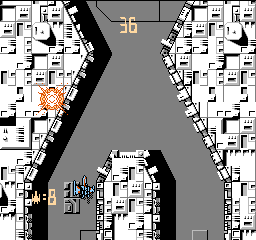 Fly through the cross-over carefully

Section 5
Once again, the trench will divide two times in this section. However, the first division features a cross-over which you must travel across in order to survive. After the second division, individual block barriers appear in the trench. The last blocks are a pair that you can fly through, but are safer to fly around. This is followed by a narrow central trench.
Section 4
You must pay attention to which direction you travel when the trenches divide in this section. After a T tile, the trench will divide, followed by a cross-over. Beyond the cross-over, you must be in the right section as the left one will dead-end. Following that, the trench will divide two more times. The next division is open on both ends, but the one that follows dead-ends on the right side, so travel down the left. A few blocks and barriers appear before the next section starts. 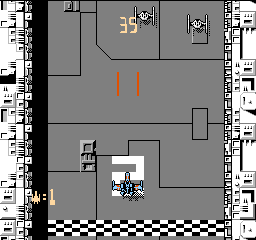 Track your progress as the sections count down

Section 3
After some tricky trench flying, this section takes it easy on you. You should feel safe flying a full speed, or very close to it. The width of the trench shrinks and travels in different directions, but there are no surprises other than a few barriers towards the end. One appears on the left, followed by two on the right. Between the right two, there is an extra-life tile, but you must collect it very carefully.
Section 2
First the trench will divide. Then a few blocks will appear as obstacles. This is followed by alternating right and left barriers, and another trench divide. Then the tunnel snakes back and forth.
Section 1
Immediately after a T tile, the trench divides. The split paths merge into one narrow path before opening back up and dividing again. After the second division, the path narrows. Once you fly through the second narrow path, the rest of this section is wide open, and you can safely fly forward at full speed. 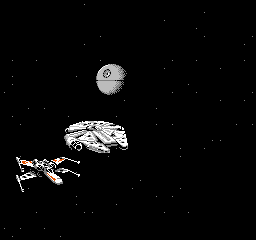 Luke and Han make their getaway

Section 0
Once you cross the line to the final section, the game takes over.

Luke will pilot the X-Wing to the center and use the force to time the dropping of the bomb in order to destroy the Death Star. You will then be treated to the ending of the game (which, unlike many other parts of the game, is rather faithful to the movie) and the final credits. Congratulations.