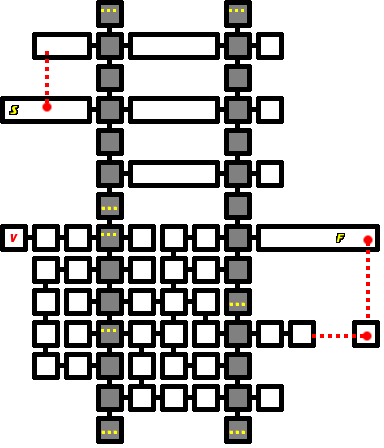 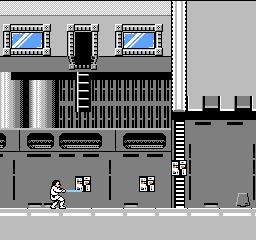 As you enter the Death Star, you'll encounter a series of short rolling droids which you can easily destroy with your lightsaber if you squat down. After the second droid, you will see a multi colored panel in the background. If you swing your lightsaber and hit it, the hatch above you will open and a ladder will appear. To reach this ladder, you will have to activate Force Speed and make a running jump, or use Force Levitate to float up to it (although this method is really not advised unless you have a lot of Force crystals). If you do float up to it, it will take you to an alternate path two floors above where you started. This alternate path is somewhat easier than the path on the starting level. Regardless of which path you take, be on the look out for Stormtroopers who fire at you almost as quickly as they arrive on the screen.

When you reach the left shaft, you must carefully leap across the gaps to reach the opposite side by using the blocks. If you slip and fall, very quickly get to the right side of the shaft. Hopefully you will fall down to the next ledge before you fall too far and get vaporized by the energy beams that occupy the shaft at various levels. If you took the upper path, you will have a fairly easy time breaking blocks as you make your way to the right. Assuming you took the middle path, you must jump over the spikes and land between them and the small droid. Then break the Force block on the column, and jump up and clear away the droid flying overhead. You will need to activate Force Speed (or Levitate) in order to make the leap over the spikes. Then hop across the last two columns and make your way down to the floor. A Stormtrooper will be waiting for you before the exit, and you must make sure that you leap over his bullet while you're not standing under spikes. If you were unfortunate enough to land in front of the lower path, you will have to activate Force Levitate just to get through the first portion of the corridor. The remainder is fairly straightforward, but this is a one way trip, you cannot return to the left. 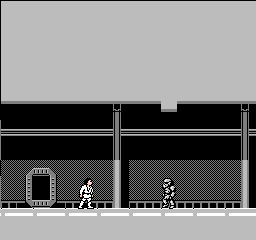 When you reach the right shaft, you want to fall down until you are four floors below the starting floor (so fall down six floors if you took the upper path, and only two floors if you took the lower path.) There is a pistol capsule in the room to the right two floors below the starting floor, but you do not want to collect this; if you do, you will be unable to swing your Lightsaber and break open the prison doors. Head into the jail corridor and watch out for Stormtroopers. As you pass each jail cell, break the doors open with your Lightsaber and step inside. The first one is empty, and the second one contains a bounty hunter which resembles Boba Fett. The third one also contains a bounty hunter, but it has an extra life capsule as well. It is the fourth cell where you will find Princess Leia. Rescue her and she will join your companions. Be aware that as soon as the dialog box goes away, you will be outside with an approaching Stormtrooper who will shoot at you very quickly. 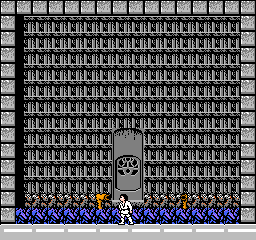 Now you need to escape. Don't try going back to the left. You'll have to continue to the right where all you will find is a grate. Stormtroopers will crowd the corridor, cornering you. You may seem trapped, but if you hit the grate with your Lightsaber, you will open a hole in the grate which will allow you to fall down the garbage suit. Just like in the movie, you won't be alone when you reach the bottom. Two tentacle-like eye stalks will peer out of the water. Very carefully move to attack both of them. As soon as you destroy them, the walls will start closing in on you. Take another cue from the movie and contact R2-D2. If you choose him in the menu, he will indicate that he understands, stop the walls from falling, and open the door for you.

You will now be on the right side of the bottom half of the Death Star. Compared to the top half, the bottom half is much more maze like, and composed of small interconnected rooms. There are a couple of different paths, but the walkthrough will provide the most direct route to Darth Vader. 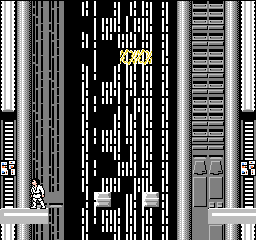 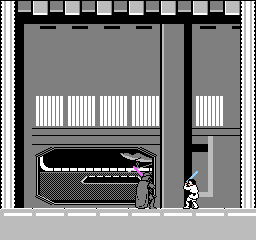 This time, you will truly be facing Darth Vader. He won't transform into another creature. However, after the first time you hit him and knock him backwards, you won't seem to be able to do any more damage to him. In order to proceed with this fight, you must first contact Obi-Wan. He will tell you to use the Force, which will permit you to damage Darth Vader once again. Since he remains in his normal form, you must develop a new strategy to defeat him. The best way to go is to stand a safe distance from him, and let him attack with his Lightsaber. After he attacks and starts moving again, leap over him and attack him from behind. He will not be able to turn around and counter attack until he stops and swings his Lightsaber in the original direction. Once he does turn, let him approach you and swing his Lightsaber again. Leap over him after he attacks and repeat the pattern. Strike him four times and he will be defeated (although he will not leave a large Force crystal behind).

You will then hop back into the Millennium Falcon and escape from the Death Star. You will receive a distress call from Chewbacca, who is trapped in a frozen jail on the ice planet of Hoth. You must destroy eleven enemy fighters to land on the planet surface.