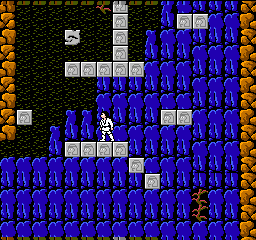 You begin at the bottom of a mountain which you must ascend in order to reach the temple where Obi-Wan is being held captive. Start out by heading right, and defeating the two frogs on the steps. Carefully leap across the gaps, from ledge to block until you are beneath a short vine. Jump up to the vine and push

to climb it. Jump up the short staircase and attack the small snake creature by squatting down. At this point, you have two options (illustrated in the screenshot to the left). The right path is slightly easier, but the left path leads to a pistol which will prove very useful to you. If you take the left path, you must jump to the block on the left, and then up and over to the platform above, destroying the block over the platform as you leap. Then climb up the vine, and attack the blocks on your left until you have access to the pistol capsule. Using running starts, leap up to each platform above you, careful not to slip and fall down through the bottom of the screen, until you reach the top of the chasm. 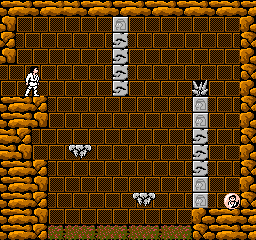 Cross to the right, and you'll see the top of a waterfall with a statue on the opposite side. Shoot the statue eight times with your pistol, while squatting under the bullets it fires at you, until it is destroyed. Then leap over the waterfall and walk through the wall behind the statue. You'll find a secret room where you must navigate your way across a gap in the floor on two floating platforms. If you punch a hole in the right wall by shooting the block, you can reach the side of the room and gain access to an extra life capsule. Then you must utilize the floating platforms again to return to the previous section. The statue will return, but you can easily destroy it from behind (be very careful jumping back over the block above the waterfall). Continue to jump up to the small sets of stairs above, and watch out for the bat flying around.

You may be tempted to destroy the statue in front of the blocks, but it's better to use it as a platform, both for reaching the force blocks above, and to cut a tunnel through the blocks behind. Watch out for the snakes that fall down along the staircase, and jump up to the platform above. Climb the steps and time your jump to the next platform while watching out for the turret on the right wall. Jump up to the small block on the left, and back to the next platform with the snake on it. Climb up the vines, watching out for the bat, and jump to the platform on the left. Watch out for the snake which falls off the platform above, and proceed upward. Take care of the frog near the top, and carefully jump over the spike block as you approach the ledge to the right. Once you reach the ledge, you'll encounter a Stormtrooper, a frog, and a second Stormtrooper before you reach the temple entrance. 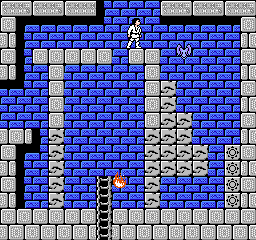 When you enter the temple, you'll see a ladder in the lower right corner that leads down. Ignore it for the time being, and leap over the gaps to reach the room on the right. Shoot through the wall, and carefully time your approach to the center ladder so as to avoid the fire. Shoot the bricks on the other side of the ladder, and climb to the top of the room, destroying the bat on the way up. Stand below the right side of the hole in the ceiling, and jump up while holding

so that you grab ahold of the ladder once you enter the bottom of the room. Climb up, and leap over to the ladder on the right. Climb up again, and then jump down to the floating platform when it reaches the right. Ride it across to the left and jump up to the ladder below (you don't need to make use of the left ladder unless you want to). Climb up to the next room. There are two robots that fly diagonally through the room. If you still have the pistol, you can blast them before you jump into the lower right corner of the room. Use the blocks along the right wall to reach the ladder above.

When you climb up this ladder, you'll encounter another "Darth Vader." After you strike this Vader one time, it will transform into a giant bat-like creature. It will fly up to the ceiling and float back and forth. From time to time, it will dive down to attack you. When it does, it flies forward very briefly before flying back up. Every fourth dive that it makes, it launches forward and flies above the floor at a very high speed. You can always safely squat underneath the bird. The best strategy is to let it begin to dive down towards you and walk a short distance ahead of, or behind the creature, so that you can safely strike it while it remains close to the ground. It takes four hits to defeat, and it will leave a large force crystal behind. Collect it, and climb down the ladder.

Watch out for the robots and the spikes and the floor, and jump down to the ladder on the floor. Use the floating platform to safely navigate above the gap in the floor. Back in the room with the circling fire, exit to the room on the left. At this point, it would be safest to activate the Force power of Levitation. Use it to safely float down to the room below, and along the left side of the room. Destroy the top three rows of Force blocks and leave the bottom row alone. Very carefully hop over the single spike between the Force block and the gap to reach the floor. Cross over to the right where you'll find Obi-Wan. Be sure to swing your Lightsaber (or shoot your pistol) one time to clear away the beams, and rescue Obi-Wan. 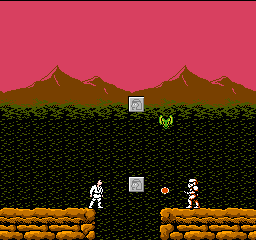 Back outside of the temple, you will have the option to use the Landspeeder again. This is a double edged sword; with it, it is easy to crash into walls and end up in a bad situation, but without it, it's difficult to clear the jumps over the spikes. When you ride in the Landspeeder, don't go too slow or too fast. Travel at a moderate speed, and forget about collecting Force crystals from defeated enemies. You'll pass one Stormtrooper and then a short wall, and then another Stormtrooper and wall. Then a Stormtrooper in his own Landspeeder will appear behind you. It's not a bad idea to collide with this Landspeeder so that you lose your own, as the next jump is difficult to pull off. You'll see two blocks over a gap, with a bird and a Stormtrooper beyond. Try to eliminate the bird before you jump if possible, and wait until the Stormtrooper turns its back to you before continuing.

From here, another Stormtrooper will confront you from the front, and another will appear in a Landspeeder from behind. If you're on foot and wish to make it over the spikes, it's a good idea to activate Force Speed to be safe. After a bird and another Stormtrooper, you'll encounter a structure with many snakes falling down. Clear away the middle band of blocks so that you can access the extra life capsule on the ground. Then shoot your way out through the Force blocks on the bottom. A few more snakes and birds will attack before you reach the end of the stage. You'll take off in the Millennium Falcon and receive a distress signal from C-3PO. You'll have to destroy seven enemy fighters before you can safely land on Iscalon.