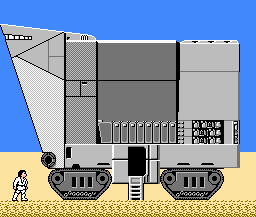 When the game begins, you will see R2-D2 being carried off by a pair of Jawas. You must then chase after them by proceeding to the right. You'll encounter small desert creatures which you must squat down to attack with your lightsaber. Jump over the first rock, clear away the creature, and get a running start to jump to the top of the second rock. A bird will appear in the sky. If you wait for it (either on the rock or the ground below), it will fly down to the level of your head. Back away once it starts to descend and attack it when it levels off. Then leap over the gap in the ground.

Two Sand People will approach you as they drop down the staircase of ledges. They will leap up in an effort to crush you with their staff. Move left out of their way and attack them when they land. Two more Sand People will be waiting for you at the top of the cliff. Drop back down to the ground, and keep an eye out for quicksand. As you approach more small desert creatures, quicksand holes will open up, so be sure to hop over them. You'll reach a Sandcrawler with an open door. Jump up to the entrance to enter. 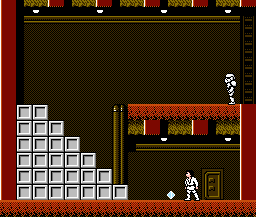 You must investigate the four rooms inside the Sandcrawler. You begin in the lower left room. Attack the small creature inside, and jump up to the ledge where a Stormtrooper is patrolling. Watch out for the Stormtrooper's gun, and attack it with your lightsaber before proceeding to the next room on the right. You will find a bird and another small creature. You don't have to drop down to the floor, but if you don't, you'll miss the opportunity to collect the 1-up icon hidden behind the destructible blocks. Carefully land to one side of the small creature and attack it. Then break a hole in the blocks to gain access to the extra life. Once you have it, climb up the ladder on the right side, and leap up to the ladder that leads to the room above.

Once you climb up, you'll be face to face with what appears to be Darth Vader. He will tell you that he has your friends held captive, and then attack you. Wait until he swings his lightsaber once and then attack him from a safe distance. He should be pushed back and transform… into a scorpion. The scorpion takes four hits to defeat. It lurches forward a short distance, and then reverses itself before marching forward again. Make sure that you attack it from a safe distance while your are standing still and immediately run away. If you are moving towards it when you attack, your momentum will carry you right into the scorpion. Hit it four times and collect the large force crystal that it leaves behind. Then nter the room that opens up to the left. Swing your lightsaber once (it actually doesn't matter where you do it, you don't have to hit the beams, but you must swing the lightsaber) to free R2-D2 and the Jawas, and then approach them to rescue them. 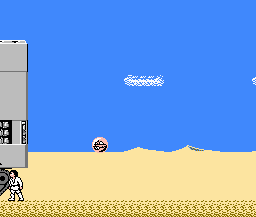 You will return to the outside of the Sandcrawler. Attack the Stormtrooper that's approaching you, and grab the capsule to ride in a Landspeeder. The Landspeeder kills enemies on contact. Push

to go faster, and push

to slow down. The Landspeeder is invulnerable to enemy attacks, but will be destroyed upon contact with a wall. It can also jump off the ground. The faster you are moving, the higher it will jump. If you choose not to use the Landspeeder, or if you happen to crash, you'll have to fight your way to the right end of the stage. At the end, you will enter a building and end up in the Millennium Falcon.

As you escape Tatooine, Obi Wan contacts you and asks for your help. Then you will launch into hyperspace. When you arrive outside of Kessel, you will enter into combat with TIE Fighters. See the Walkthrough for more information on how to complete the Millennium Falcon stages of the game. Once you have wiped out five fighters, the Falcon will land on Kessell.