The ship is underway and 8t88 is somewhere on board. You must find him.

Mission Objective: Open the topside cargo doors and jump into the ship.[edit] 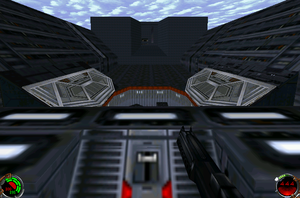 Run up the slope and down again to the topside docking area. Cross over the closed metal doors and enter the control room. Climb the stairs and hit the switch beneath the window to open the topside cargo doors.

Secret Area 1/6: This secret area is behind the stairway in the control room.

Mission Objective: Shut down the venting fan and follow the main ducts to the reactor core.[edit] 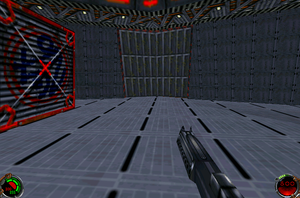 Drop down into the newly-opened area and shoot the circuits to cut power to the doors. Without power feeding them, they will open. Since the ship is basically symmetrical, it’s not possible to get lost. As such, you can go through either door and end up in the same place; one door leads to a couple ramps and the other leads to a ledge overlooking the room. The next room opens to a bridge with the lights flashing on and off. Proceed through the door to the next area, then drop off the edge to the walkway below and finally to the floor. Head through the large door on the other end of the room.

Go through the door to the left and into another control room to find the red key.

Secret Area 2/6: Backtrack to the previous room and take an elevator to the floor below. There is a large entrance to the storage area. Enter the area and jump on top of the cargo crate in the right-hand corner, then jump up into the secret area.

Cross to the other side of the control room (where the red key was) and go through the doors to enter a large room with ledges and catwalks. Drop carefully down to the lowest catwalk and jump across to the ledge. Run to the end of the left-hand ledge and enter another control room. 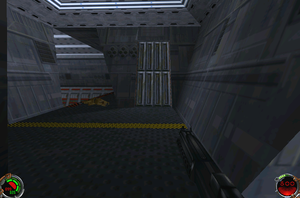 Locate the switch on the wall; it disables an energy barrier leading to the next control room, which is identical to the previous one. Head up the first ramp, go through to the next room, and pick up the blue key. There is another switch on the wall that needs to be turned off. Take the ramps all the way to the top and make your way around to the narrow door pictured. Go through the room and through the next one to an elevator. 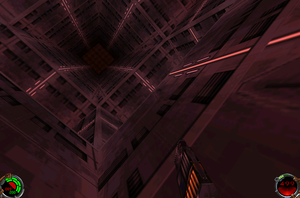 At the bottom of the elevator and through the door is a room containing a venting fan. Shoot both of the power circuits (identical to the ones that powered the doors at the beginning of the level) to shut it down and enter the vents.

Secret Area 3/6: Make your way to the left frame of the fan; the secret area is a small room at the end.

Once inside the vents, head down the slope to the right and then up again. There will be a distinctive door in the right-hand wall that leads to the reactor core.

Secret Areas 4/6 and 5/6: Go past the door that leads to the reactor core. Continue down the slope and then up the next one. One secret area is to the right (contains health packs) and the second is straight ahead (contains bacta tanks).

Mission Objective: Interrupt the reactor flow and take the lower vents into the shuttle bay.[edit] 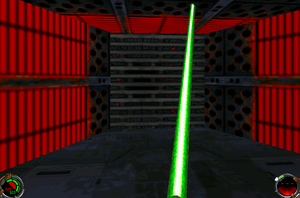 Once inside the reactor core, run around to the door on the opposite end, go inside, and take the elevator. There are two switches on the wall on either side of the window. Hit either one to temporarily shut off the reactor core. Go back out into the core and drop down into it. There are walls in each of the four compass directions; one of them contains a grate. Destroy it and go into the air vent.

Secret Area 6/6: In the left wall of the air vent is a small corridor; Force Speed is needed to access it due to the strength of the airflow. At the end of the corridor is a panel on the ceiling. Cut it with the lightsaber or activate it to open it and access the room above. 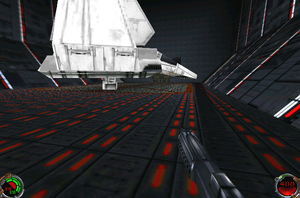 Jump out at the end of the air vent to gain access to the shuttle hangar. Open the door at the far end of the hangar to reach 8t88.