Gran are three-eyed goat-faced aliens who fill a gangster/thug role in the game. Some are equipped with a stormtrooper rifle and others with thermal detonators; still others prefer to beat you to death with their bare hands. 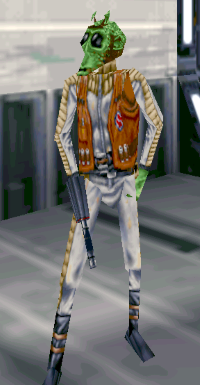 Rodians are short and fairly weak. While their pistols cannot be wielded by Kyle, they can be used for ammunition. Like the Gran, they are gangsters and can only be found in certain places. 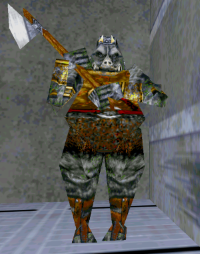 For some reason, there are quite a few Gamorrean guards in Nar Shaddaa. As in the movies, they use large halberds that they swing with tremendous force. While somewhat slow and not too difficult to kill, they tend to hide to the sides of doorways and bring their halberds down upon their unwitting target. Try not to get hit by them; they deal 40 health damage per hit. 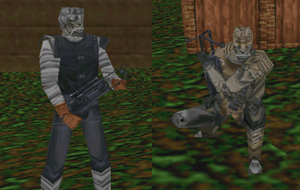 Being the opportunistic nomads that they are, Grave Tuskens can be found in droves on Sulon. In the years following Morgan's death, they descended upon his home and irrigation system. They wield either a stormtrooper rifle or a Bowcaster, and are rather adept with the latter. 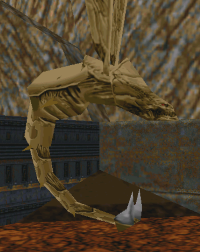 Mailocs are giant, mutated creatures that have infested Morgan's irrigation system and power generator. They have two sharp, unforgiving stingers that ignore personal shields and deal health hits. They can also be found in much smaller numbers on the planet Ruusan. 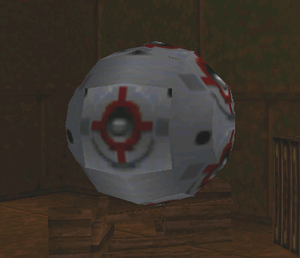 Small and relatively weak, remotes are traditionally used by the Jedi for lightsaber training. Kyle can practice with one in the workshop after retrieving Rahn's lightsaber. Aside from that, they only appear around the fuel station in Baron's Hed. 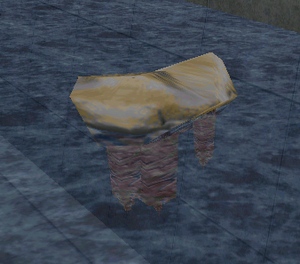 The Water Cyc is a creature specific to the rivers of Sulon, and several of them have managed to wash into some of the inner irrigation channels. While they don't move, they have three long tentacles and will smack Kyle with them. It is best to dispatch them from outside the water if possible, or at least to give them a very wide berth. 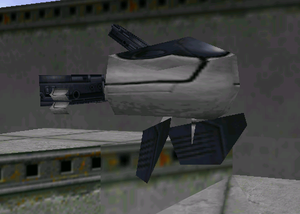 Sentry droids can be found patrolling only a few places in the game. They are equipped with a weak laser and will fire a couple shots before retreating. They make a distinctive sound that gives away their position. 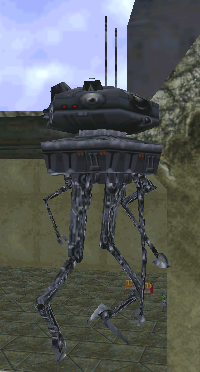 Like sentry droids, probe droids patrol the air, although they are usually stationary. They also make a distinctive sound that gives them away. Be careful when dispatching them; they explode and will deal damage if you are too close. Parts of the droid can also hit you, so it is best to take them out quickly and from a distance. 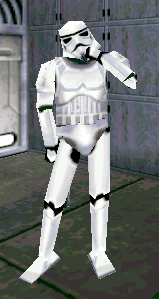 The Field Stormtrooper is designated with a pauldron on the right shoulder. They are no more difficult to kill than a standard trooper. The pauldron color indicates which weapon the trooper uses.

Note: Yellow-pauldron troopers will use their Rail Detonator as a melee weapon if you get close to them.

A low-ranking official in a tan suit, the officer is very weak but is a dead-eye with his pistol. They can be heard giving orders to their squads and are one of two types of driver for the AT-ST. A few of them carry keys. 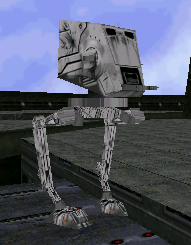 Mainly found patrolling Jerec's palace in Baron's Hed, the AT-ST is an obnoxious machine that fires laser blasts in pairs. They are shielded and can only be damaged by explosions or concussion waves; they can also be taken out with the lightsaber. Thankfully, they can't kill Kyle by stepping on him, but their lasers can fire upon him even if the AT-ST is facing the opposite direction. They are driven by either officers or commanders, who will drop out of them once they have been destroyed. 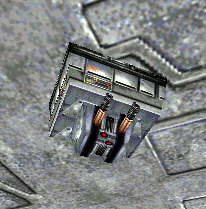 Turrets come in a variety of shapes and sizes, and are mounted to either the ceiling or the floor. They are designed for long-distance defense, so while they fire relatively slowly, they can lock onto a target from far off and hit with dead-on accuracy. They can be easily destroyed with any type of weapon, and when they have been damaged enough, they will "break," meaning that the gun portion will spin wildly and fire randomly until the whole thing explodes. It is best to keep your distance.

The Drugon is a giant fish that is found in the rivers of Ruusan. They hide in cutouts, away from the current, but will go after you if you get too close. They are easily killed with a couple shots from the Concussion Rifle. They're found in the levels 5 and 13. 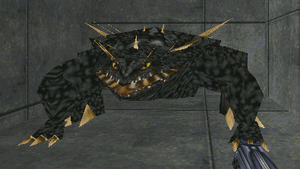 Kell Dragons somewhat resemble lizards in stature, and are kept by the Imperials. One can be found in Jerec's palace and two others can be found in the burial grounds of the Valley of the Jedi. They are thick-skinned and hard to kill, but can be killed most quickly with the lightsaber. Just make sure to avoid their mouths because they pack a nasty bite.

Commandos are almost exclusive to the Imperial facilities on Ruusan with the exception of one straggler in Jerec's palace. They're a bit tougher to kill than stormtroopers and have an annoying habit of jumping while shooting, making them a bit difficult to hit. They are one of two types of driver for AT-STs and a couple of them carry keys. 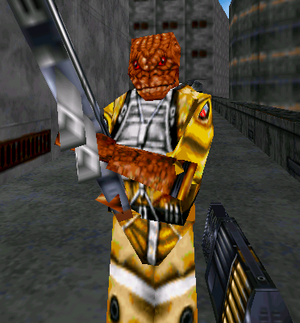 Skulking around the fuel station in Baron's Hed are the Trandoshans, tenacious reptilian creatures who are the only creatures in the game to wield the Concussion Rifle. They exclusively use the rifle's primary attack, and if you get too close for them to shoot, they start bludgeoning you with the gun. It is often easier to use Force Pull to rip their guns away from them than it is to fight them, simply due to the sheer amount of damage the Concussion Rifle causes. 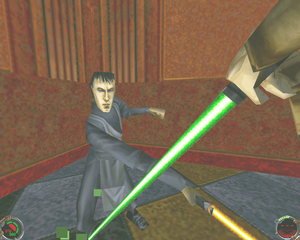 Yun is the first of the Seven Dark Jedi that Kyle encounters in the game. He uses Force Blinding and Persuasion.

Gorc and Pic are known as the deadly twins of the Force, waiting for Kyle in the shuttle bay of the Sulon Star. Gorc uses Force Grip and Throw, while Pic uses Persuasion. 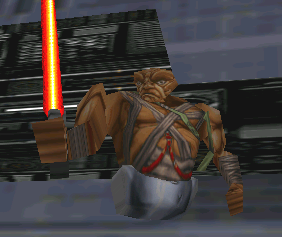 Maw survived his battle with Rahn and skulks around the docking bay on Ruusan. He uses the Force to float and although he doesn't use any powers, he makes frequent use of a spin attack. 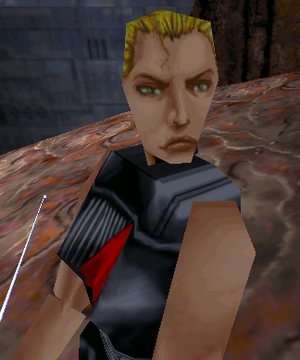 Sariss is one of the more difficult Dark Jedi to defeat. She makes use of Force Deadly Sight and is adept at blocking. She is encountered following the crash of the Sulon Star but will become Kyle's assistant if the player chose the dark side. In this case, Yun will instead be confronted and fought to the death. 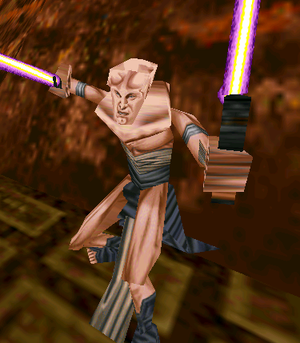 Boc is the sixth Dark Jedi who holds Jan captive and lies in wait for Kyle at the Valley of the Jedi. He uses Force Destruction and, more interestingly, battles with two lightsabers. 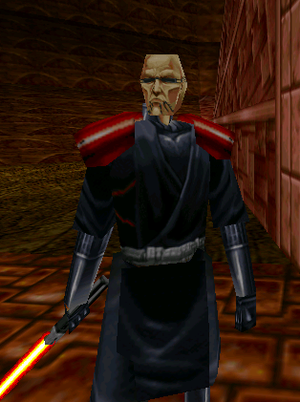 Jerec, the man who murdered Morgan Katarn, is the final Dark Jedi encountered in the game. He is the final force standing between Kyle and the power of the Valley. He uses Force Lightning and Destruction, although the use of the latter is thankfully very rare.

Go to top
← Weapons and Ammo | Enemies | Items and Power-ups →