The cargo ship is about to debark for the Valley of the Jedi with 8t88 on board. Sneak onto the ship through the refueling pipes on the far side of the fuel station.

Mission Objective: Get off the rooftops and into the fueling station.[edit]

Walk towards the Ugnaught and to the left to find a flight of stairs. Once at the top, drop onto the ledge and crouch to squeeze under the pipe.

Secret Area 1/10: Once beyond the pipe, walk along the ledge to the right. 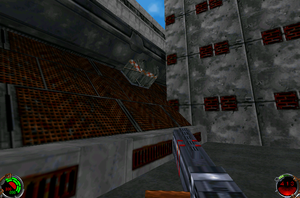 Drop down onto the floor and locate the door that leads into the fuel station. It is locked, so jump over the large pipe. If your Force Jump isn’t developed enough to clear the pipe, there is a tight space between the pipe and the wall (on the right-hand side) that will lead to the next area.

Go through the doorway and fall to the floor below. Go up the ramps into the building and pick up the yellow key. Backtrack to the door and go inside the fuel station.

Mission Objective: Once inside, drain the primary fuel tank and pass through it.[edit] 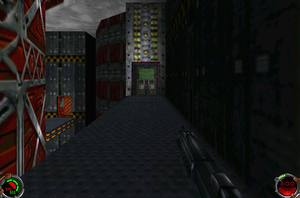 Secret Area 2/10: After hitting the switch to drain the fuel, backtrack and work your way to the right and down the ramp to a room. Before entering the room, jump up onto the ledge above.

Secret Area 3/10: Once inside the room, go forward and to the right to the area with the fuel distribution schematic. To the left will be a very poorly-lit elevator shaft. Use the switch to call the elevator, then ride it to the floor below. Once you exit the elevator, jump up to the left to get into the cubbyhole. 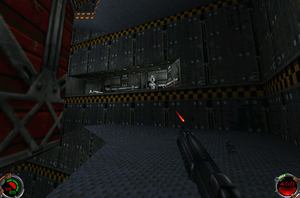 Exit this room and go down the ramp. There should be two Stormtroopers on the ledge up ahead. Jump up onto it to get into the next room, and locate the small door in the far wall. Hold the crouch key to gain access to the next area.

Secret Area 4/10: Immediately after proceeding through the door, go into the area to the right and jump up into the cubbyhole. 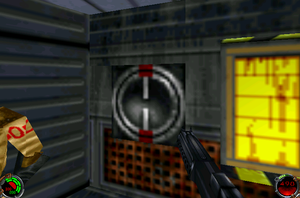 Directly ahead is a ledge encircling the primary fuel tank. At this point, it is safe to simply fall down to it. Locate the wrench socket and activate it to open the door to the tank.

Note: From here on out, wrench sockets will be the primary switches you will be using. Because they are located in tanks and pipes, the door will need to be closed before the next one is opened. Safety regulations will not permit both doors/valves to be open simultaneously.

Once inside the tank, cross the bridge and exit through the next door. Jump across to the platform and take the elevator.

Mission Objective: Shut down the fuel flow to empty out the pipes.[edit] 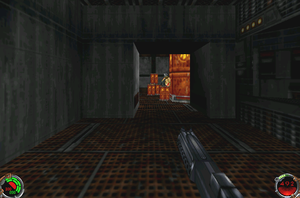 Secret Area 5/10: The elevator will go down first, by default. Stay on it to ride it up to the room above the platform from which you exited the fuel tank. The room itself is the first secret area; the other two are cubbyholes in the fuel drum storage room beyond.

Secret Area 6/10: Proceed to the room with the fuel drums. Jump up to the very top of the highest drum and go into the cubbyhole.

Secret Area 7/10: To gain access to this secret area, blow up the fuel drums and then drop back down to the floor. There is a cubbyhole in the wall. 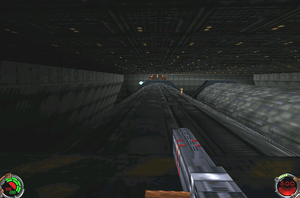 Take the elevator down and go through the door at the end of the room. Locate the switch on the wall and activate it to drop the metal ramps down. Take the ramp down and onto the center pipe. There are turrets on the far end; shoot them safely from a distance with the concussion rifle or rail detonator and then cross to the opposite end of the room.

Secret Area 8/10: After making your way to the far end, jump up onto the center pipe’s wall connector. Travel along the ledge to the right, jumping across the gap to the next connector. Continue over the top of the right-hand pipe and down. There is a cubbyhole to the left, containing a Power Boost.

Secret Area 9/10: If you destroyed the turrets from afar, there will be a hole blown open in one of the panels in the left-hand wall of the alcove. Otherwise, there will be a panel that looks different than the others. 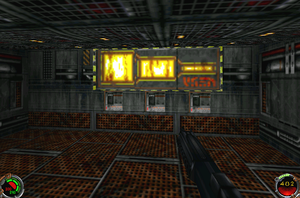 Go into the room and locate the series of switches on the wall; there will be a schematic of the fuel pipe above them. Throw each switch to empty the pipe (in order of largest to smallest) and take the elevator down when all three sections have been emptied.

Hit the switch on the far wall to open the valve and gain access to the fuel pipe.

Mission Objective: Sneak through the fuel pipes to the reservoir under the cargo ship.[edit]

Remember, only one valve can be open at any given time. Once the valve opens, use the wrench socket to close it again, then run along the pipe to the valve beyond.

This part of the level is a continuous path of fuel pipes; it is impossible to get lost. The basic thing to keep in mind is that there is leftover fuel in the majority of the pipes, which will erupt in a series of explosions if any kind of bullet hits it. Upon entering the primary fuel tank, Kyle remarked that “I need to be careful with blaster fire.” The pipes are magnetized, so bullets will rebound several times before either finally being absorbed or hitting the fuel. To make matters potentially worse, there are several seeker drones. They are best taken care of with the repeater, since it fires the quickest and is very accurate. Also, the fuel is hot and will burn Kyle if he stays in it (only applies to swimming). 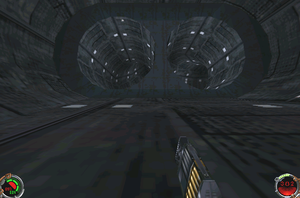 The first major landmark is the smaller pipes side by side. From here, choose either the left or the right pipe; they both end up in the same place and will lead to the next landmark: the smaller pipes situated in a vertical fashion. Jump up into the higher pipe and run along it to find a ledge with power-ups if needed. From the ledge, drop down into the fuel far below, then jump out and slide down the pipe to the next area. Alternatively, backtrack to the bottom pipe and slide down to the next area. Swim across the fuel pipe up ahead and jump out, then continue sliding and dropping through pipes. The next area is a fuel reservoir. Cut the metal door with the lightsaber to fall through the pipe and into the next part of the station. 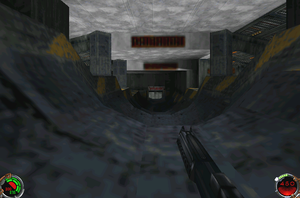 Secret Area 10/10: Kyle falls down the pipe and ends up in something of a ditch (pictured). A bit ahead and up above the left-hand bank is a small cubbyhole.

Climb over the right-hand bank of the ditch and go through the doorway. There is a stairway leading up into the station. Be careful not to fall into the fuel river below. Once inside the station, make your way to the door and into the next area. Continue on to the room with the large fuel tank and an elevator.

Ride the elevator to the top and you will be in a room with two fuel tanks that are connected by a series of small metal beams. Go up the sloped floor and locate the elevator. If you’re in need of ammo and shields, jump up onto the support beams and make your way to the other side of the room. Although this isn’t a formal secret area, it contains energy cells and an armor vest.

Ride the elevator to the top; it’ll be a long ride with one wall opening up to a view of the Sulon Star. Once it reaches the top, exit the elevator and head up the slope to the right, then snake back around to the doorway. Go up the stairs and get onto the top of the fuel pipe. Run along the pipe to the very end and drop off of it to the left. 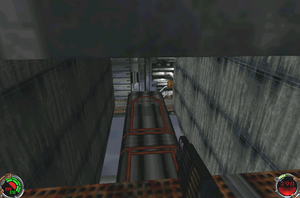 Crouch to go through to the ledge above the pipe fueling the cargo ship and drop down onto it. Run to the end and jump to the ledge of the ship to end the level.