There are many items in Dark Forces II that serve a variety of functions. They can be divided into three categories: Inventory Items, Quest Items, and Tools.

While everything Kyle picks up is stored in the inventory, inventory items are those that stay with Kyle from level to level. These items include the field light, IR Goggles, and bacta tanks.

Although the field light isn't a physical item, it is bound by default to the F2 key and allows the player to see better in dimly-lit areas. 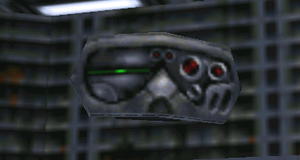 IR Goggles allow the player to see enemies and destructible walls, though they don't function very well as low-light vision. They can be found in one of the secret areas in the first level, and are bound to the F3 key by default.

Note: The field light and IR Goggles consume batteries as power. If Kyle runs out of batteries, the Goggles/field light will automatically shut off.

Bacta tanks are portable containers full of medicinal fluid. They restore health points and are stored in Kyle's inventory; he can hold a maximum of five. 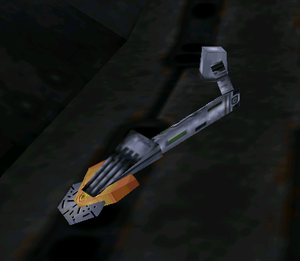 The data disk in the clutches of 8t88's severed arm

Quest items are items that Kyle recovers in order for the story to progress. They consist of Kyle's father's data disk and 8t88's head. The game is structured such that Kyle cannot progress through the level until the item is recovered.

Tools differ from regular inventory items in that they are specific to a given level and disappear from the inventory afterward. They are used to open doors and perform other actions in the game that require security clearance, and consist of keys and wrenches.

Keys come in a variety of colors and are used to unlock doors, disable energy barriers, or manipulate catwalks. Doors are commonly trimmed with a series of white lights. A key-specific door will be trimmed with colored lights. Some levels contain locked rooms with power-ups and ammo, so look around and see what else you can unlock!

Wrenches only occur twice in Dark Forces II and are used to perform mechanical tasks that otherwise couldn't be performed, like opening valves in fueling pipes and rerouting water in natural power generators. The sockets for wrenches are very distinct and they never occur as stand-alone switches. 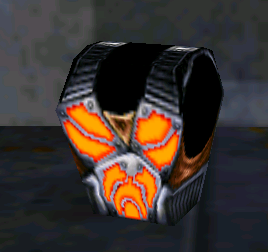 Super shields restore some shields and make Kyle invincible for a short period of time. The values for shields and health in the HUD will be yellow to indicate an active effect.

Note: The super shield does not protect against impact damage.

Batteries power the field light and the IR Goggles. Kyle can hold a maximum of six.

Tip: If you are out of batteries and there's an MSE droid nearby, shoot it for a battery. 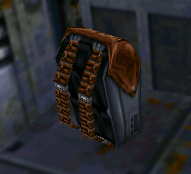 Smuggler backpacks award a small amount of health, shields, and energy cells, and can be found in several areas.

Stormtrooper backpacks award a small of amount of shields and energy cells.

Although they do not give ammo, power boosts are unique power-ups that drastically increase your weapon's rate of fire. The ammo value in the HUD will be yellow to indicate an active effect.

Revives are a rare power-up that completely restore both health and shields. There are only two in the entire game.

Power surges completely restore Force power and, for a short period of time, provide unlimited Force power. You can only use the surge that corresponds with the side of the Force you're on. Only one surge spawns at a time.