The unstable Valley has swallowed both you and Jerec, trapping you together in the center core. His power will be replenished unless you can cut him off from the force stream.

Mission Objective: As Jerec revives in the core, he pulls at the Jedi monuments. Once the statues block your access, he will destroy you at a whim. A mechanism left by the ancient Jedi can temporarily interrupt his rejuvination.[edit] 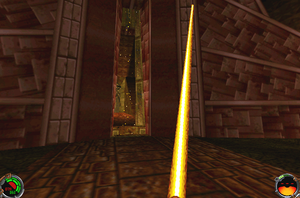 Jerec is the final dark Jedi to defeat, and the environment of the Valley core gives him the potential of being difficult to fight.

Unlike the others, Jerec has access to the Force power that is trapped in the core and will use this power to heal himself. The most fundamental goal is to get in his way when he begins running to the core so that he can't jump up into it and heal himself. While healing, he will be surrounded by a protective shell and will be invincible.

If he manages to gain access to the core, his use of the power will create a pulling force, drawing Kyle up into the air. Once the initial pull has ended, Kyle will fall and take damage when he lands. This pull will also cause the two large statues at either end of the room to begin moving towards the core. If the statues reach the core (after three healing cycles), Jerec will have successfully shut himself in the core with the Force power, causing the mission to fail.

Because the Jedi predicted that someone might abuse the core's power, they installed a failsafe that will disrupt the power usage. While Jerec is healing and the statues are moving, hit the switches located behind the statues. Although the switches will not stop the statues from moving, they will interrupt the power and cause Jerec to heal incompletely. In order to work, they must both be pushed.

Do not fight Jerec in the core itself. He will be able to heal with minimal effort and even though Kyle would be in the core with him, the mission will still fail if the statues reach the core.

In order to defeat Jerec, the player will need to attack him until he retreats to the core, at which point they need to get in his way to prevent him from accessing it. All that is required of the player is to stand in the doorway and hold the forward key to keep from getting pushed back into the airflow. During his retreat, Jerec will not defend himself, so defeating him at this point is very simple.

Jerec makes frequent use of Force Lightning and, more rarely, Force Destruction. Unlike Boc, Jerec will not distance himself from the player and cast Destruction; he will cast it if the player runs away. Force Protection is useful against the lightning, and Blinding is useful for distracting Jerec for a short time. There are power surges in the core if you're in need of more Force power.

Because of the airflow in the core, you are able to stack mines floating in the open shaft. Save them up in the previous levels, and drop as many as you can carry into the shaft. When Jerec retreats to heal, he will step on the mines and suffer great damage and be easily defeated (partially from crush damage from hitting the ceiling). Hokey religions and ancient weapons are no match for a stack of high explosives.