There are different types of NPCs found in Dark Forces II. They serve no useful function, but Kyle's actions against them determines his alliance with a certain side of the Force. For example, if Kyle kills them, the slider on the Force Power screen will move toward the dark side. Thankfully, what determines Kyle's permanent Force alliance is the decision made to develop either light or dark force powers. Developing light powers will place him on the light side, while developing dark powers will place him on the dark side.

In the pamphlet that comes with the CD version of the game, civilians are credited as having useful information. In reality, they're useless. There are certain instances where civilians will get caught in a crossfire or an explosion that can be caused by you or an enemy; the game doesn't distinguish between them.

Beating up droids doesn't affect Kyle's standing with the Force since they're not alive, and sometimes they drop power-ups. MSE droids (mouse droids) contain a battery and sometimes, Gonk droids and R-series droids will backfire when they die. 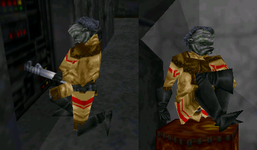 Ugnaughts are strange creatures specific to the fuel station, and can be found repairing various things. They also have a bad habit of sitting on top of fuel drums.