Both the Valley of the Jedi and Jan are in danger. You must defeat Sariss so you can find the Valley. The freedom of the galaxy depends on it.

Mission Objective: Defeat Sariss so you can find another route into the Valley.[edit] 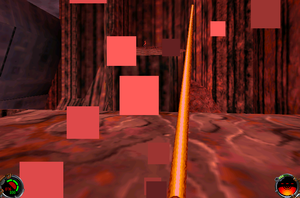 Sariss is the first of the Seven Dark Jedi to use an advanced dark power. Although Gorc used Force Grip, it was relatively weak. Sariss will use Deadly Sight if the player gets far enough away from her. Essentially, Deadly Sight continually burns the player, rapidly depleting shields and health. Thankfully, hiding behind a large enough barrier or escaping the power’s radius will interrupt the power, so a good place to go in this event is the fallen Sulon Star. It is very difficult to escape the power’s attack radius since the battle area is fairly small. Also, the Sulon Star contains debris the player can use if they developed Force Throw.

If Kyle remained completely true to the Light Side, Force Protection will be unlocked. This power is incredibly useful against Sariss, since her use of Deadly Sight will somewhat force the player into engaging in close combat. Make use of the power surge to keep Protection going as often as possible; Kyle will take absolutely no damage while it is active.

Note: If the player chose the Dark Side earlier, they will fight Yun a second time.