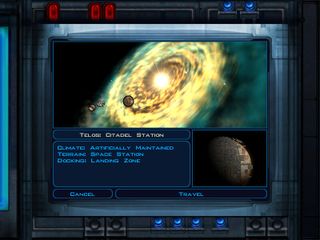 As you disembark from the Ebon Hawk after landing in Docking Bay 1 of the docking module on Citadel Station:

After you leave, a woman in white approaches the Ebon Hawk's loading ramp...

Lieutenant Grenn and his TSF officers escort you to the TSF Station force cages in the Entertainment module:

He uses the computer panel by the east wall to open the force cages... all the force cages, at once. You may all be unarmed and unarmored, but there are three of you, as Jedi both you and Kreia are Unarmed Specialists, and Atton is capable of Sneak Attacks. Ladies and gentlemen, there's only one word for that: idiocy.

The door to the TSF Jail in the southeast corner that remained locked throughout combat now opens:

You're escorted to Apartment Complex C in Residential 082 East: