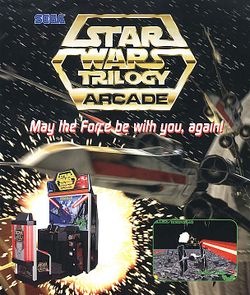 Star Wars Trilogy Arcade is an arcade game first released in 1998. The game is a 3D rail shooter based on the original trilogy of Star Wars films and was released along with the special editions of these films. Sega also released an accompanying pinball game. The game is not to be confused with Star Wars Arcade, another Star Wars game released to arcades by Sega in 1993.

Normal gameplay involves the player moving a crosshair around the screen using a joystick and pressing the fire button atop the joystick to shoot. A "special event" button lights at certain points of the game and when pressed, triggers an event to happen onscreen. The game puts the player in several key battles of the Star Wars films with one mission for each original Star Wars film. The player selects which film's mission to play first and each mission has two parts.