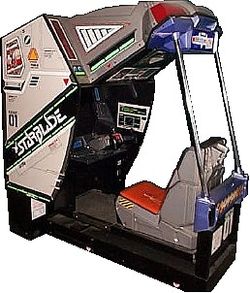 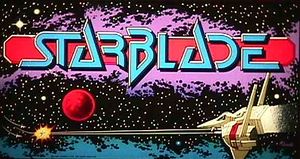 Starblade (スターブレード, lit. Sutāburēdo) is a FPS arcade game that was released by Namco in 1991; it runs on Namco's System 21 hardware, and is the first game from the company in which only the main characters (in this case, the player's ship "Geosword" and the enemy flagship "Commander"), have names. Also, because the only times music will be heard are during the opening cutscene, the final battle with the aforementioned "Enemy Flagship Commander", the ending sequence, and the high-score table, it is the Namco game that sees the least amount of usage for the Yamaha YM-2151 - and as a result, it's also the Namco game that sees the most amount of usage for the C140. The first mission will see Geosword heading towards the enemy planet, "Red Eye", and the second mission will see it heading towards and destroying the power reactor "Octopus"; however, the third and final mission will see it being drawn into a final battle with the enemy flagship "Commander".

The Sega CD port, released in 1994, replaced the visuals with simpler wireframe graphics. The 3DO port in the same year included the original visuals and an enhanced mode with textured graphics. The PlayStation port, titled Starblade α and released in 1995, retained these features.