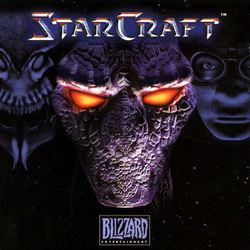 StarCraft is a real-time strategy game developed by Blizzard Entertainment for the PC in 1998 and for the Macintosh in 1999. Blizzard released an expansion later in 1998, StarCraft: Brood War, commonly acknowledged to have correct many game balance issues and leading the way to its eventual recognition as standard to which all other RTS games are compared to. Set in the future, on planets far from Earth, it features three races: the human Terrans, the psionic Protoss and the bestial Zerg.

The story focuses on the activities of the three species in a part of the Milky Way known as the Koprulu Sector. Millennia before any of the events of the games, a species known as the Xel'Naga genetically engineer the Protoss and later the Zerg in attempts to create pure beings. These experiments backfire and the Xel'Naga are largely destroyed by the Zerg. Decades before the beginning of StarCraft in 2499, the hardline international government of Earth, the United Earth Directorate (UED), commissions a colonization program as part of a solution to overpopulation. However, the computers automating the colony ships malfunction, propelling the Terran colonists far off course to the edge of Protoss space. Out of contact with Earth, they form various factions to maintain their interests. Intrigued by the behavior and mentality of the Terrans, the Protoss remain hidden to examine the humans, while protecting them from other threats without their knowledge. However, the Zerg target the Terrans for assimilation to harness their psionic potential, forcing the Protoss to destroy tainted Terran colonies to contain the Zerg infestation.

StarCraft begins just days after the first of these attacks, where the predominant Terran government, the Confederacy of Man, falls into a state of panic as it comes under attack by both the Zerg and the Protoss, in addition to increasing rebel activity led by Arcturus Mengsk against its rule.