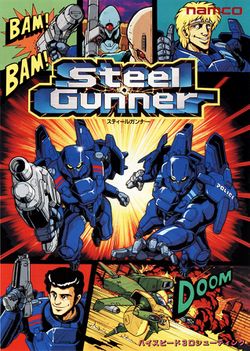 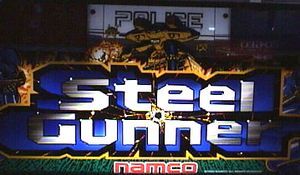 In Steel Gunner, the players must take control of Garcia and Cliff, who are cops in the Neo Arc (which is a pun on Newark, New Jersey) police force; their mission is to stop a radical terrorist group STURM (it is not known what the letters stand for), as they have captured the well-known authority on physics, Dr. Ryan, and his assistant, Dr. Ellis, in order to create an abominable war machine. Like how Phelios (which was released two years earlier, and also ran on NS2 hardware) created the illusion of allowing scores not ending in "0", it creates the illusions of not having any scoring counters (like The Return of Ishtar and Yōkai Dōchūki) - but it has the text "1UP", "HI-SCORE" and "2UP" on its title screen, which indicates that it does. The players can shoot anything on the screen, including all background objects and even innocent bystanders; however, if they should do the latter, it will cause them to lose energy.