Stick Hunter was the very first ice hockey game published for the Famicom. It was developed by K Amusement and released at the end of 1987. The sub-title of the game is "Exciting Ice Hockey". As sports go, hockey is not as popular in Japan compared to other sports. And as the first ice hockey game to appear on the system, it is a little rough. Confusing and unintuitive controls make the game feel slow and unresponsive. The game was only released in Japan, although it is entirely playable by non-Japanese speakers. 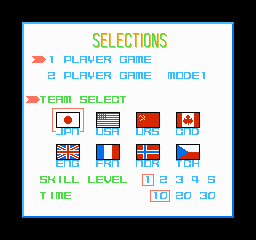 When starting a new game, you have a few options to choose from. 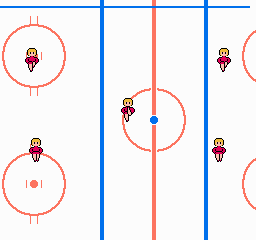 Each period begins with a face-off that occurs in center ice. Once the puck is dropped, the player who reaches the puck first will be on offense, and the opposing team will be on defense. When on defense, your objective is to block the shots of your opponents and steal the puck away to regain control and go on offense. When on offense, you must skate past the opposing defenders, and shoot the puck past the goalie to score a point. If you collide with another skater and knock them down, you may be penalized, and the referee will call for a face-off near the offender's goal.

Remember that in addition to controlling a particular skater, you are also always in control of your team's goalie. Also remember that you must not press any direction on the control pad if you wish to shoot the puck. Play proceeds until the end of the period, and then the players are reset at the start of the next period. The game is over after three full periods have been played. A mid-period show is presented to the players between the second and third period, where five female skaters dance on the ice.