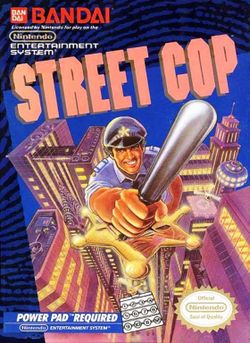 Released as Manhattan Police (マンハッタンポリス, Manhattan Police?) in Japan, Street Cop is a game where the player has to chase after criminals while jumping over things and using the club to apprehend the foes. The player has to step on the buttons corresponding to each of the cop's actions, such as moving, jumping and clubbing. Street Cop was developed and published by Bandai. It was released in 1987 in Japan as the sixth game in the Family Trainer series, and in June 1989 in North America.

Ben is a rookie cop fresh out of the Police Academy. He grew up on the crime-ridden streets of this city. As a young boy he dreamed of one day becoming a great detective so he could clean up the streets of his neighborhood and give them back to the decent people who live there. His success is up to you.