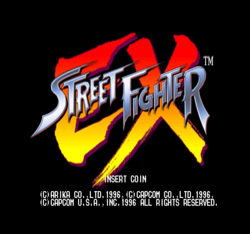 Street Fighter EX is an arcade game developed by Arika and published by Capcom in 1996. It was the very first attempt at taking a popular two dimensional fighting game, and bring the concept to three dimensions. At the time of its release, games like Virtua Fighter and Tekken were starting to steal some of the popularity that traditional 2D fighters were enjoying because of their eye-popping visuals. So developer Arika decided to try bringing the popular cast of Street Fighter into a 3D world.

The result was met with mixed reviews, but one decision made by Arika helped the game succeed more than any other: the gameplay mechanics remained two-dimensional. While many 3D fighters allowed players to side step in and out of the background, and jumping took on a whole different meaning, Arika decided to leave the gameplay mechanics of Street Fighter II and Alpha alone, and only made the game visually three-dimensional. This meant that fans of the series could play the game instantly instead of having to learn a whole new system.