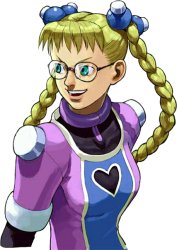 Area (エリア, Eria?) is the young daughter of a scientific inventor, although her intellect is said to surpass her own father. When her father's inventions fail to sell, she decides to modify them as weapons and test them in combat against the world's greatest martial artists. In battle, she wears a pair of high-speed rollerblades and a mechanical right arm codenamed "Cancer" (キャンサー, "Cancer"?), which her father originally built for hard labor.