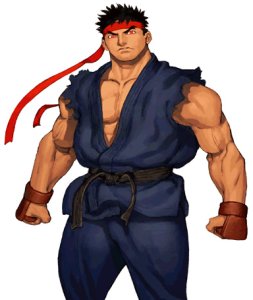 Very much like Akuma, Ryu's fighting spirit happens to be very compatible with the Satsui no Hadou power of murderous intent. While Akuma embraced this power in order to truly become the greatest fighter in the world, Ryu and Ken's master, Gouken, worked hard to shield them from such an influence, and taught them a method of fighting that was devoid of assassination techniques. However, Akuma sensed in Ryu the capacity for Satsui no Hadou and awaited the day when Ryu would accept it and become a worthy challenger for combat.

Ryu was unaware of this, and first tapped into the power of Satsui no Hadou at the end of the first official Street Fighter tournament during the championship fight against Sagat. Sagat was about the end the match with a crushing blow when Ryu, refusing to lose the match, lost control over his discipline and struck Sagat with a deadly dragon punch that ripped Sagat's chest open, leaving a damaging scar.

Trouble by the loss of control, Ryu struggled to understand what caused that to happen, and how he could prevent it from ever happening again. During the first EX tournament, Ryu was confronted by Akuma. Akuma was hoping that after his fight with Sagat, Ryu would have embraced Satsui no Hadou and he could fight Akuma in a manner that was worthy of Akuma's power. Disappointed that Ryu had not reached that potential, he announced to Ryu that he murdered Ryu's master in hopes of speeding up the process.

Ryu was unable to chase after Akuma to extract revenge, as he was prevented by M. Bison who wanted Ryu to join his Shadowloo army. When he rejected Bison's offer, Bison attacked, watching with great amusement the anger that grew in Ryu and the changes to his physical power that took place as a result. Eventually Bison realized that Ryu was a completely different person, completely consumed by Satsui no Hadou, and Ryu complicitly accepted Bison's offer since he believed he would get the chance to kill Akuma as a result.

To test Ryu's new capabilities, Bison sent Ryu on to his next match, which happened to be with his old training partner Ken. Ken recognized that Ryu was different, and did all that he could to affect a change in Ryu that would restore Ryu's mind. Ken succeeded in doing so, and after the two defeated Bison in combat, he helped Ryu come to grips with the power that lay inside Ryu.

Ryu vowed to never allow Satsui no Hadou to take control of his mind ever again. The presence of Evil Ryu in the third tournament is not canon and is simply there as a "what if" scenario.

Street Fighter EX Plus, Plus α[edit]