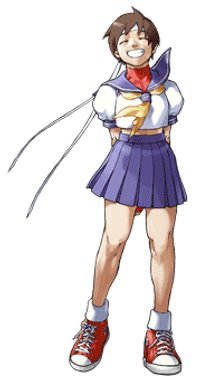 Sakura is a young school girl from Japan. She is a very competitive child, and frequently encounters new hobbies or activities that she would like to become the best in the world at. But no activity captivated her quite as much as street fighting the day she happened to see Ryu fighting in a sparring match. The way that he fought, his ability to harness his inner ki and release it in the form of energy from his hands, fascinated Sakura like nothing else.

From that moment on, Sakura was determined to find Ryu and ask him to teach her. Fortunately, Sakura was naturally quite gifted at fighting, and found that she was able to reproduce some of the arts that she saw Ryu perform just by concentrating and imitating him. Her technique wasn't identical to Ryu's as she put her own spin on things, but she still hoped that Ryu could teach her how to perfect her techniques.

When she heard that a Street Fighter tournament was being held, she signed up with a moment's hesitation. Dragging her school mate around the world for a summer, she arrived at the competition, and did surprisingly well, but failed to advance far enough to meet and challenge Ryu. She did catch up with him after one of his fights, and he was flattered by her appreciation, but felt that he was not ready to take on any students.

When the second tournament was announced, Sakura was completely bummed out by the fact that it was in the middle of the school year, and she was prevented from entering by her parents. When the third tournament rolled around, and it was announced that fighters were to have partners, she was sure that she could convince Ryu to be her partner. Unfortunately for her, Ryu decided to partner with his long time training partner Ken.

Dismayed, she spotted another girl around her age who also seemed disappointed. Her name was Nanase, and she had hoped to fight with her big sister Hokuto, but Hokuto decided to partner with her brother Kairi. Sakura felt that she found a terrific partner and Nanase agreed. However, once it came time to develop a strategy, they bickered quite a lot amongst themselves, and never really came to an agreement about how best to proceed. As a result, they were quickly knocked out in the first round. Angry at one another for the loss, the decided to never speak to one another again.