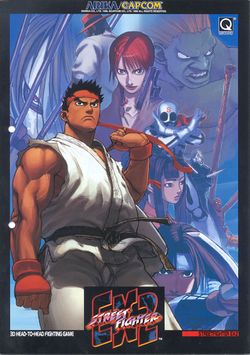 Street Fighter EX2 is an arcade game developed by Arika and published by Capcom in 1998. Compared to the first generation of Street Fighter EX, EX2 features a substantially more powerful 3D engine, allowing models to be constructed from more polygons, and smoother textures to be applied to the models, creating a more dynamic and modern look for the 3D fighter.

Like its predecessors, Street Fighter EX2 takes the basic game mechanics of the Street Fighter series, most notably Street Fighter Alpha, and pits popular Street Fighters and newly designed characters against one another in a 3D environment. The result is a familiar style of gameplay that fans of the original can immediately pick up and adapt to combined with the eye popping visuals of progressive 3D games.

EX2 simplifies the cast compared to EX Plus α, stripping out some of the less popular characters and adding in new characters, as well as bringing back fan favorites like Blanka and Vega. While this version did not see a home conversion, its successor Street Fighter EX2 Plus was ported to the PlayStation.