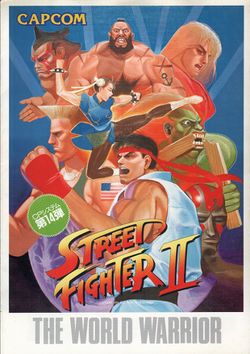 Street Fighter II - The World Warrior is the first iteration of the Street Fighter II series, released on March 1991. The game featured all the basic features that would be carried over to subsequent Street Fighter II editions. The original game featured eight selectable characters, with Ryu and Ken being the only characters with identical moves. In the single-player tournament, the player faces against the other seven main characters, before proceeding to the final four opponents, which were non-selectable boss characters. In World Warrior, matches could go up to ten rounds if there were no clear winner before making the player lose by default (in Champion Edition and onward, this was reduced to four rounds). This version featured several glitches, such as Guile's infamous "invisible throw" and "Golden Stance".