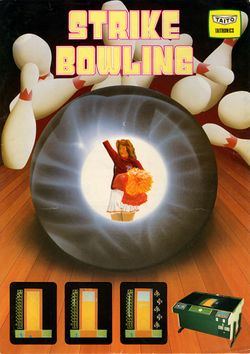 Strike Bowling is a bowling arcade game that was released by Taito Corporation in 1982; it was the last game from the company to use an Intel 8080 microprocessor (running at 2 MHz), with a General Instrument AY-3-8910 running at 1.248 MHz for audio. The gameplay is similar to that of Midway's 4 Player Bowling Alley (which was released four years earlier), but it only allows for up to two players - and when either player scores a strike, the text of "STRIKE X" appears in the centre of the screen as five female cheerleaders appear upon its right side, and do a dance. However, it does not feature the "beer frames" that "4PBA" did, and the game is also not to be confused with Incredible Technologies' Silver Strike Bowling (2004), for that title came over twenty years after it, and featured more realistic-looking graphics (and a virtual bowling alley); it also begat a sequel, Silver Strike Bowling '09 in 2008.