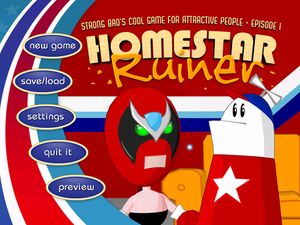 Strong Bad receives an email suggesting he "beat the snot out of" his long-time rival Homestar Runner. Strong Bad thinks this is a great idea, and heads off to look for him. When he gets there, however, he discovers Homestar has entered the Tri-annual Race to the End of the Race, and decides it would be even more fun to beat Homestar at his own game than to simply beat him up.

After the introduction, check out Strong Bad's computer to see the first of several emails. Next, open the map and decide where Strong Bad will draw The Track. Its placement has no effect on the game, so put it wherever you like. 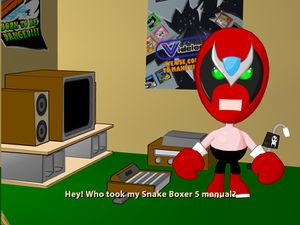 One of several side quests

When you're done, head to the left and go down the stairs. Head to the far left. First, collect the Metal Detector; this is used to find goodies later on. In this room you can try your hand at a Teen Girl Squad comic, or play a few rounds of Snake Boxer 5 on the Fun Machine. Once you finish using the Fun Machine, Strong Bad mentions that he wrote down the controversial "Forbidden Mode" cheat code in the manual, but discovers the manual is missing. Throughout the game you can question people about the manual, and try to find the missing pages. 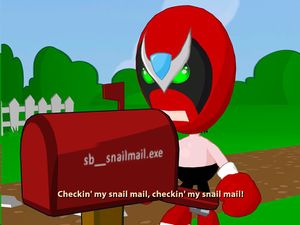 You can continue exploring the house, but there are no other items here. When you're ready, head outside. Open the mailbox to find the balaclava, the first of several costumes you can collect throughout the game. When you're ready to proceed, open the map and choose The Track. 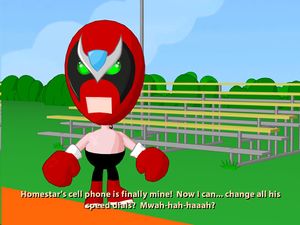 Another nefarious scheme is hatched

Talk to Homestar and ask about the race. Also ask him about the Snake Boxer 5 manual to advance to the next step of finding it. When you say goodbye he gets a call from Marzipan. He tosses the phone away in disgust, and then heads to the locker room to regain his "game face". You can now add Marzipan's house to your map. Head to the right and grab the cell phone. Go to Marzipan's.

Head to the left. Investigate the shrub for Strong Bad to comment on how shabby it looks. Talk to Marzipan, and ask her about the shrub. She tells you that the shears are at Bubs'. This unlocks Bubs' Stand on the map (if you haven't unlocked it already). Ask Marzipan about the Snake Boxer 5 manual to find out she gave it to Coach Z (this unlocks Coach Z on the cell phone). Head to Bubs'. 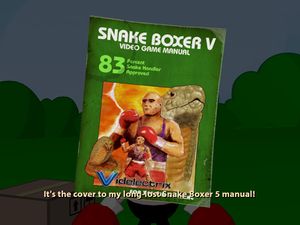 One step closer to the Forbidden Mode

Talk to Bubs to get the shears. Head to the left and look under the box to find the cover of the Snake Boxer 5 manual. Use the cell phone and prank call Marzipan. Once you do this she will leave her house. You can also optionally prank call the characters at any time (note that you cannot prank call a character if he is in the same area). If you prank call all seven you will unlock Homsar's number.

Once you have collected the shears and prank called Marzipan, head back to Marzipan's. Collect the balloons from the mailbox, then head left and use the shears on the shrub to reveal a sculpture. Collect the hedge clippings. Head to the left and use the shears on the Homestar float, with disastrous results. You now have a giant Homestar head. Get an onion from the onion patch (if you didn't already). Now head back to The Track.

Head to the right and ask Coach Z about the Snake Boxer 5 manual, which he says he gave to Bubs. Head to Bubs' and ask for the Snake Boxer 5 manual, and he will give you the first page. Head back to The Track and go to the left, then enter the locker room (going into the locker room for the first time will unlock a Strong Bad Email). Give Homestar the onion, then suggest he take a shower. Investigate the lockers, and open the center one to find Homestar's clothes. Collect them, then open your inventory and put on the Homestar disguise.

Leave the locker room and head to the far right. Homestar will come out of the locker room looking for his clothes, and will run around naked for a bit (with typical pixellation censoring covering his torso). While wearing the Homestar disguise, talk to Coach Z.

The Race to the End of the Race[edit]

The Race consists of three parts.

Don't worry about time in this section. Not only will it be impossible to win because your competitor Pom Pom blitzes through in 5.3 seconds flat, but the story is much funnier if you lose. In fact, if you want to skip the exercise in futility, you can.

So, no Silver Trophy of Ultimate Destiny for Homestar Runner means that Coach Z is embarrassed by his performance. Further, Marzipan will angrily break up with Homestar over ruining the potential victory party. On top of all that, Homestar's streak out of the locker room has landed him a public nudity charge from the King of Town.

Mission Accomplished! Homestar Runner's life is thoroughly ruined. Now Strong Bad can continue with his awesome day... until he gets home and finds out that Homestar has decided to hide in Strong Bad's house while he's a complete loser fugitive without a girlfriend! Aw, great, now you have to undo all the damage you've done!