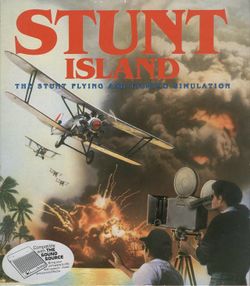 Stunt Island is a computer game designed by Adrian Stephens and Ronald J. Fortier and was published by Disney Interactive in 1992. The game, marketed as "The Stunt Flying and Filming Simulation", provides an island which contains a number of different sets, such as a city, an oil rig, a canyon, and an aircraft carrier. The player can position cameras and props around these sets, and create event triggers for things like camera pans and object movement. The game also has an editing mode where the player can splice together taped footage and insert sound effects. The game has a bias towards airplane stunts (the basic game engine is a flight simulator).

The game engine for Stunt Island was able to render several hundred (thousands?) of trees, buildings, etc, on a modest 486-33 with only a few megabytes of RAM, and threw in Gouraud-shaded polygons for the airplanes on top of it. It was a remarkable technical achievement in part due to a company known as The Assembly Line.

When a player does not wish to create a stunt from scratch, he or she may go to the Stunt Coordinator on Stunt Island. The Stunt Coordinator possesses a built-in list of 32 stunt scenes. If the player is participating in the optional Stunt Pilot of the Year competition, these stunts must be completed to improve ranking. 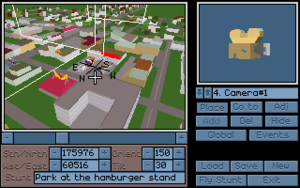 A screenshot of set design in Stunt Island

In set design, a player may place props, cameras, and collideable triggers. Conditional and timed events may also be created to perform particular actions.

While actually filming a stunt, the player's controls are that of a flight simulator. Additionally, there is an Airfield in the game where the player can select a plane and fly around Stunt Island to scout different locations.

The graphics of the game are rendered in 256 colors at 320x200 resolution. 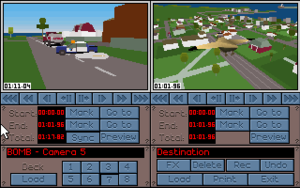 A screenshot of the editing room in Stunt Island

In the editing room the player is able to take previously recorded footage and splice them together into a single movie. Sound effects and music may also be added.

Movies may be watched in this room. Such movies may come with the game, be created by the player, or be downloaded from the Internet. The game also comes with a tool called MAKEONE which may be used to generate a self-contained version of a movie, which may be played on a machine without the game by using the PLAYONE tool.

Soon after the release of Stunt Island in 1992, there was a large amount of activity related to the game in the Flight Simulation Forum on CompuServe. Users of the software posted films they created onto CompuServe, where they could be downloaded and watched by other users.

Since 1999, Stunt Island activity has centered around the SIFA Yahoo! Group