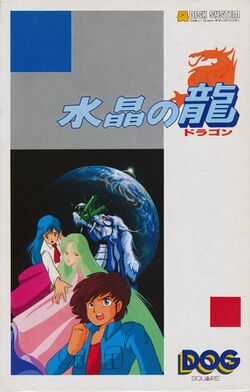 Suishou no Dragon (translated as Crystal Dragon) is a game for the Famicom Disk System released by Square Co. (currently Square Enix) in 1986. The game's title is often mistranslated as Suishou no Ryuu, but the last word is intended to be spoken in English (as indicated by the Katakana ドラゴン beneath the word in the title). Square Co. released the game under the name DOG (Disk Original Group), and the game plays as a command-style adventure game. The game is set in a science fiction-like setting, where the teenage main character must investigate a series of kidnappings and the mysterious dragon that suddenly appeared in outer space.

Many of the game's scenes involve animation, which was a specialty of Square Co. at the time, and Suishou no Dragon features a variety of anime drawings, particularly those of girls. Anime artist Gen Sato served as the character designer and illustrator on the staff, and Nippon Sunrise (current Sunrise Inc.) contributed to the animated parts of the game. The game was never released for play outside of Japan. However, in January 2003, a ROM hacker and translator known as Mute translated the game's Japanese text into English, making it playable by English speakers. This well-done translation can be found here.

The most iconic scene in the game is the frame where one of the heroines, Cynthia, is depicted standing with her arms spread outwards. This drawing inspired a famous fake game scene created by Family Computer Magazine (Famimaga); a prominent Famicom magazine published by Tokuma Shoten. The magazine explained that it was possible to start a game of yakyuken (野球拳, yakyuken? strip rock-paper-scissors) using a cheat, though this is not actually possible in the game. An altered screenshot showing the heroine losing her clothes was included alongside the article. This was not done to fool readers, but to test whether the magazine's content was being copied by other game magazines. This fake scene developed popularity on its own, and many users were made aware of this scene even if they had never played the game before. A flash movie simulating this fake scene has been released on the internet.

The following text is presented in the introductory scenes of the game, told in first person fashion by the main protagonist.

That dragon intercepted a shuttle bearing my friends Cynthia and Nial. Where could it have taken them? There's got to be a clue somewhere.

"Are you sure it wasn't a hallucination?"