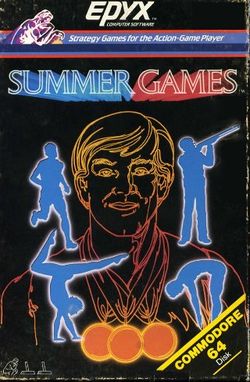 Summer Games is a sports game developed by Epyx and released by a handful of publishers based on sports featured in the Summer Olympic Games. Released in 1984 for the Commodore 64, it was also eventually ported to the Apple II, Atari 2600, Atari 7800, Atari 8-bit, Sega Master System and NEC PC-8801 platforms. Amiga, ZX Spectrum, Amstrad CPC and Atari ST versions were also created for inclusion in compilations. In 2004 it would be "re-released" on the C64 Direct-to-TV.

Summer Games allows up to eight players to compete in a series of summer themed Olympic events. called the "Epyx Games" (there was no official IOC licensing in place). The gameplay is similar to the other entries in Epyx "games" series. Each player (up to 8 in some versions) can choose a country to represent, and then takes turns competing in various events to earn a medal. On most versions, world records could be saved to the floppy disk.

Most versions feature similar artwork on the front. The only one that makes a large departure is the Sega Master System version shown below. Sega did not release a conversion of the game in Japan. The Commodore 64 version allowed players to link Summer Games and Summer Games II to engage in one large Olympics, accumulating medals in a tournament from both games.

The events available vary slightly depending on the platform, and may include:

The game allowed the player to compete in all of the events sequentially, choose a few events, choose just one event, or practice an event.