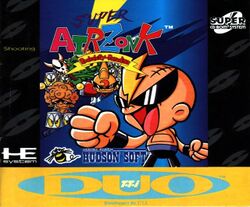 Super Air Zonk: Rockabilly-Paradise, released in Japan as CD Denjin: Rockabilly Tengoku (PC原人シリーズ CD電人 ～ロカビリー天国～, PC Genjin Shirīzu CD Denjin ~Rokabirī Tengoku~?) is a horizontal scrolling shooter developed by Dual and published by Hudson Soft. It was released for the TurboGrafx-CD/TurboDuo in 1993, and was released on the Wii's Virtual Console on November 19, 2007 in North America, and on January 29, 2008 in Japan.

Super Air Zonk is the sequel to the 1992 game Air Zonk, both of which are part of the Bonk series of games. As a sequel, Super Air Zonk contains all-new levels, assistants, and enemies, as well as a Red Book CD audio soundtrack consisting of rockabilly music. While the original Air Zonk relied heavily on multilayer parallax scrolling, Super Air Zonk features mostly single-plane backgrounds with a few exceptions.